My History with the OC Half Marathon 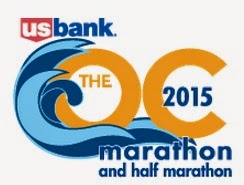 I will be running half marathon #21 next week! I have never actually "raced" this half and it always seems to be that way. When I ran the OC Half Marathon back in 2012, it was a comeback race for me after a hamstring injury so I ran it very cautiously and finished right under 2 hours. 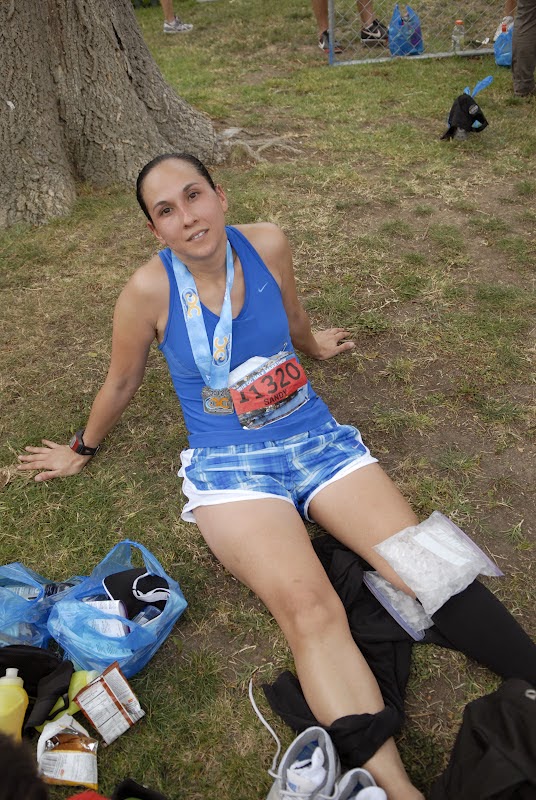 In 2013, I speed walked/ran the half marathon with my friend Caroline who was injured at the time. Speed walking is no easy task let me tell you. I don't think I have ever been so sore in all of my life after a race. The weather was perfect that day and I am glad I made the decision to stick with her because for me running isn't always about a personal PR or goal. 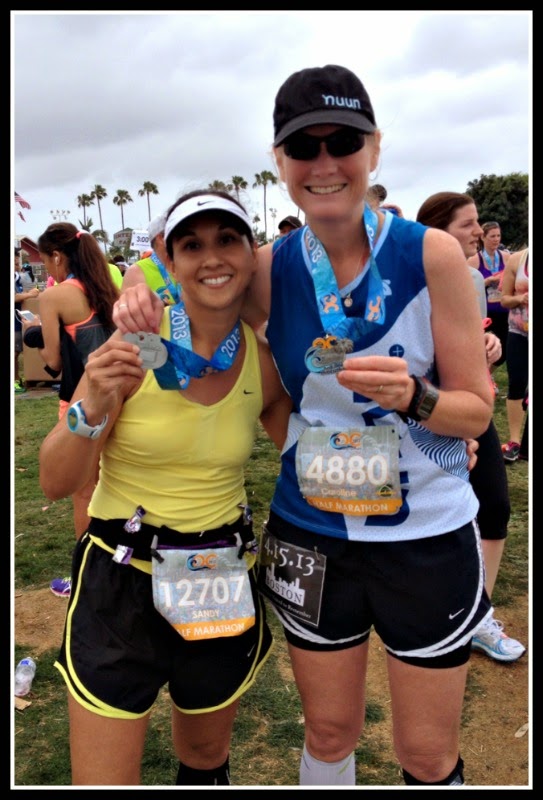 I did not run the OC Half Marathon in 2014 but I will be back to run it again this year. In 2015, I find myself in a similar situation once again. I have been having issues with hip bursitis and a knee cyst so it is kind of hit and miss. My hip seems to stay happy as long as I do my exercises and keep the pace easy on longer runs. It really gets me down sometimes because I am not sure if this is going to be something that I will just have to deal with long term or if it will go away. Maybe I am just getting old but as long as I can run I am grateful. It is tough at times but I know that I have to stay positive and optimistic.

Keeping a 9:00 pace or under on longer runs seems to be the key to keeping my body parts in check but it gets tough sometimes because I feel like I have the energy to run faster. It is not worth the consequences for the days to come so I have to run smart. I would love to run this race and give it my all but I don't think I can do that right now. Being out on the race course gives me a boost of energy and adrenaline that I don't get on my training runs. I can't lie. I know I will be tempted. My last long run went pretty well. The weather was perfect and my mental game was where it needed to be. The last five miles of my run were the best and my confidence level was lifted enough for me to feel like I can run my 21st half marathon. 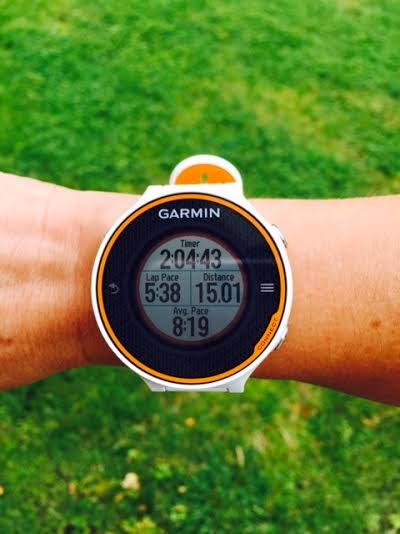 Pace has not been my reason to run lately. I have kind of putting that on the back burner for now and I am just feeling grateful that I can run. You have to keep things in perspective during these times. If you have ever been injured, you know what it is like to not be able to run at all, right? I don't have a race plan for Sunday. I think that would just be too overwhelming for me right now. What I can tell you is that I will finish the race and I will run with my heart and be thankful that to be out there. I am really excited about my second Beach Cities Challenge medal that I will earn on top of the medal for just running the half marathon! Race bling always gets me excited! 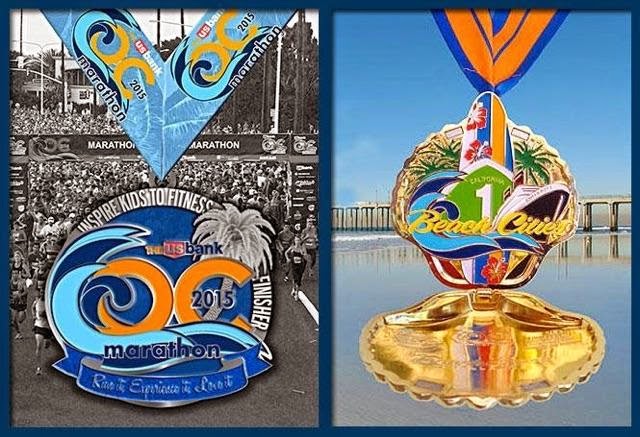 Who else is running the OC Half/Full?

Back in January, my son set a goal to lose some weight, start running and to actually run a 5K. He does not love running like I do but he made the commitment and on April 4, 2015, he accomplished his goal. My son ran  the Santa Anita Derby 5k which was his first timed 5K. 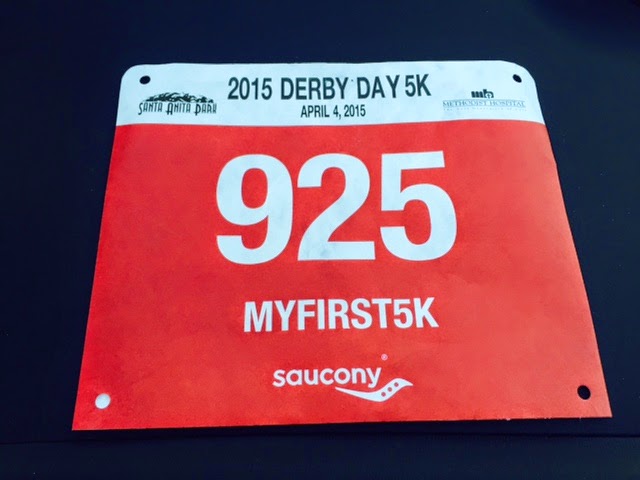 We chose this race because it seemed like a fun course. The runners go through the LA County Arboretum and Botanical Garden and the race ends on the Santa Anita Race Track. 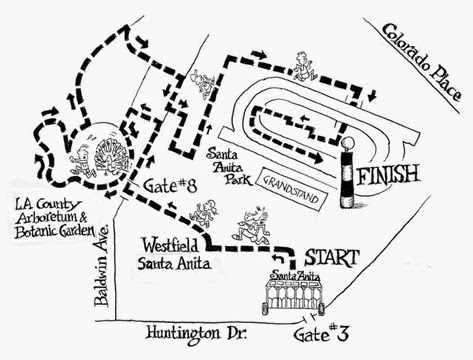 The event offered runners the option to pick up their bibs on race morning which was perfect for us. The parking and bib pick up was right near the starting line which was very convenient. 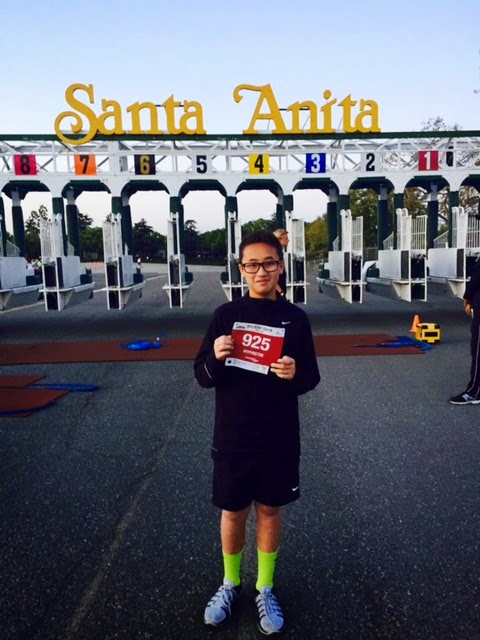 The race started at 8:00 a.m. and I waited with my son in the starting corral until it was time for him to go. The weather was a cool 64 degrees but the sun was out and the course did not have a lot of shade. I felt confident that he could run a 12:00 pace but I knew he was capable of a little bit more so he decided that 11:00 pace corral was good for him. We talked about not going out to fast and slowing down if he started to feel tired and he said he was ready but nervous. 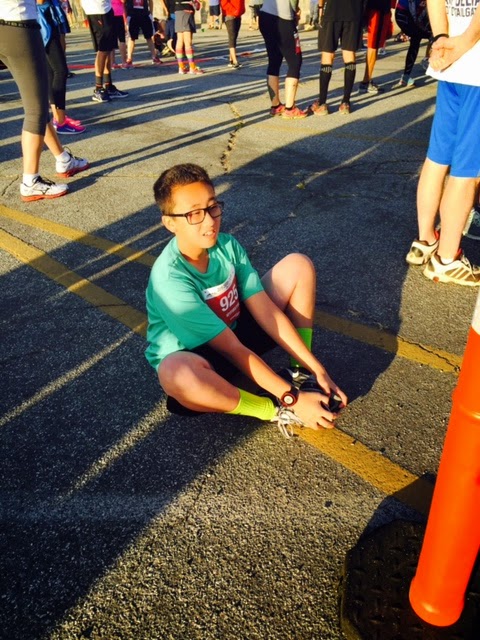 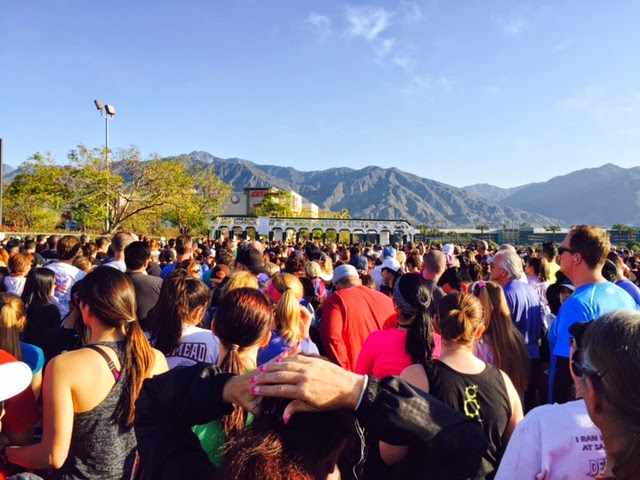 I bought him a Garmin 220 for his race which has the live track function. This allowed us to  track him on the course to see how he was doing and to allow him to watch his distance and pace to make sure he stuck to his plan. He waited for him around Mile 2.4 and were able to cheer him on. He was looking pretty good when we saw him. We headed closer to the final stretch of the race to see him finish. I was cheering for him and when he saw me he sprinted to the finish at a 5:53 pace! He did not walk at all and that was something he did not want to do. 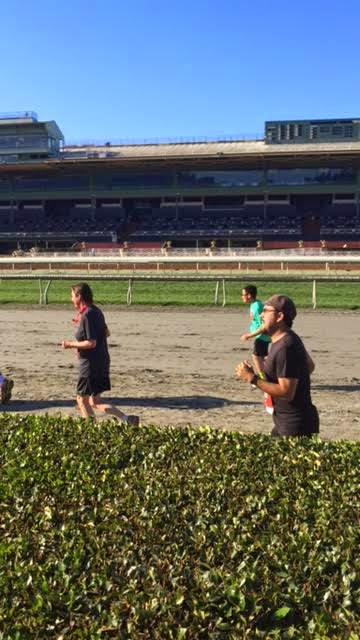 We did not get a finish line picture because is it was really hard to get into that area. He finished in 32:41 and kept his pace pretty consistent. He told me that he felt good at Mile 3 so he decided to pick up his pace a bit for the last mile. He knows that his race times are not important to me but his effort is what matters most. The purpose of the Garmin I bought for him was to help him stick to his pace and he likes to know his distance. 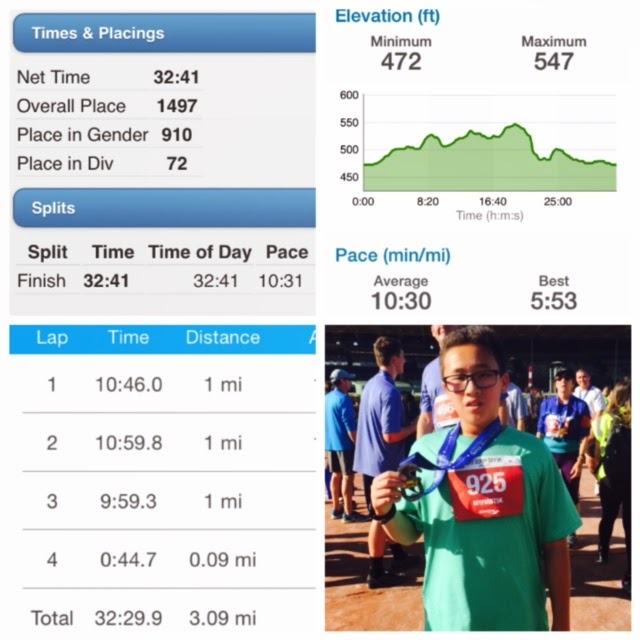 The medal was really nice and all finishers received a medal. That was important to me when we decided on a race for him. I think the medal really meant something to him. 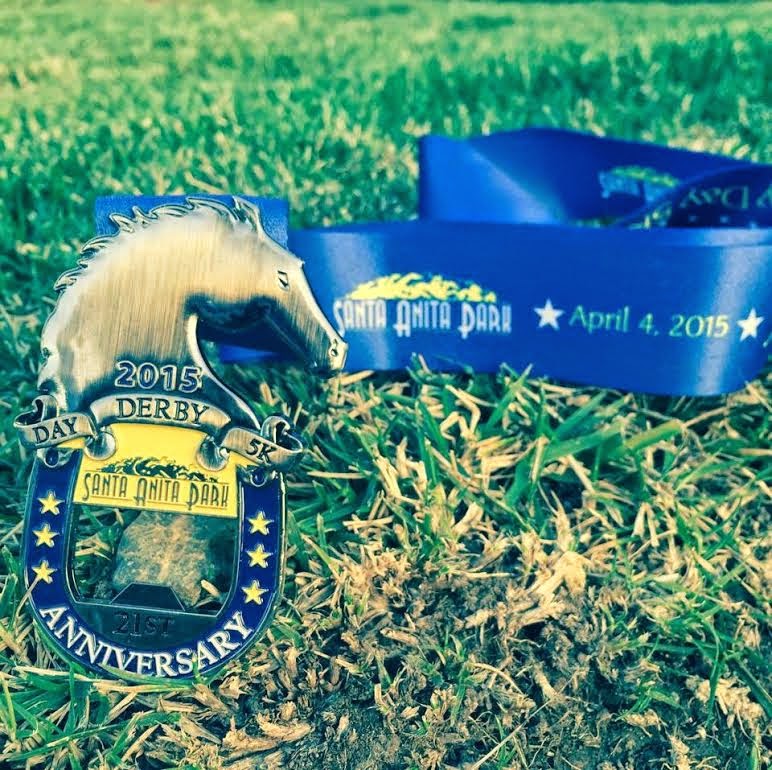 After the race he collected some post-race goodies and then he asked for some Dippin Dots on the way out. Of course I said yes to ice cream at 9:00 a.m. I think he earned it for meeting his goals. 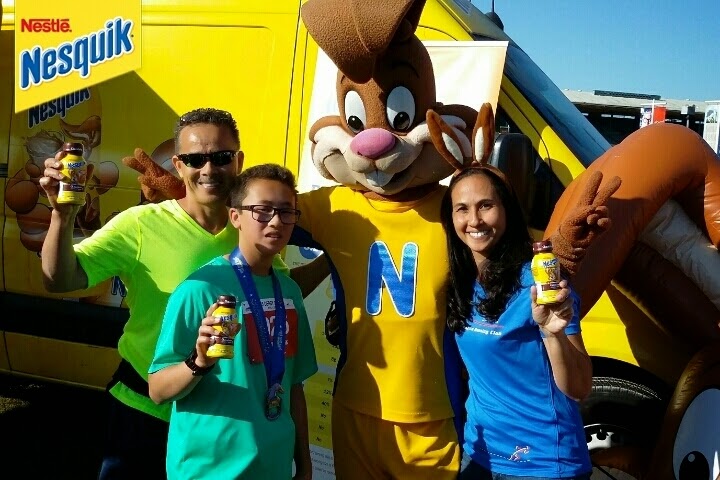 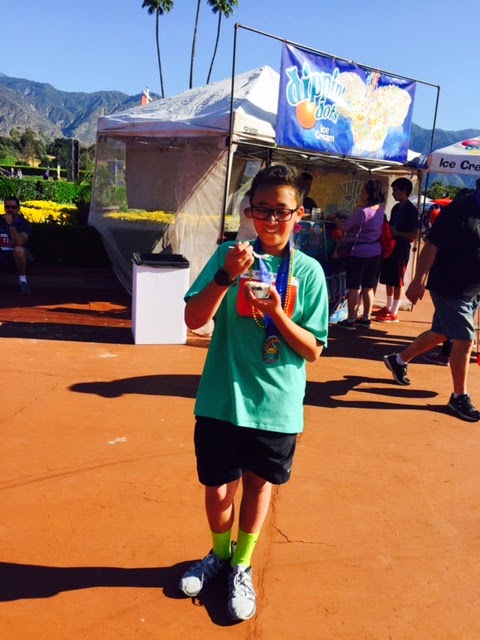 Not only did he meet his goal of running a 5K but he has also lost 15 pounds. My son loves to eat but is not a big fan of exercise but he is getting better. He recently purchased a new road bike with his own money which he enjoys more than running. He also signed up for AYSO soccer and is really enjoying it. His running has paid off for him since soccer requires a lot of running. I know he feels much more confident and that makes me happy.

He wants to improve his running times but I told him that for right now we are focusing on completing the race. He already set his next goal which is to complete a duathlon. It is amazing how motivating and encouraging your children makes them want to achieve bigger things.


We are really proud of him to say the least!
Posted by Boston Bound Brunette at Monday, April 13, 2015 10 comments: