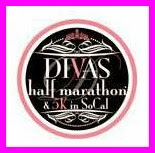 I love to end the year with a fun race where I don't have to worry about time or put any pressure on myself. I was not planning on running this race but it kind of came together at the last minute and it was my close friends first race back since her husband passed away on September 5th. I wanted to be there to support her because I knew that it was going to be tough for her since he would not be there on the sidelines to cheer her on as he always did. 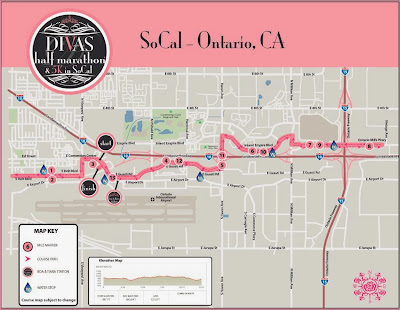 This was an inaugural race and not too far from my house which is always a plus. The course was flat and fast and probably a great course to PR if you like this type of course. The only time the course was not flat was when we crossed over a freeway overpass and it was not bad at all. We had to go over it twice since the course is an out and back. The course was well marked and there were lots of staff and police out on the course. There was not much course entertainment except for a few DJ's playing music and a cheer squad from a local high school. 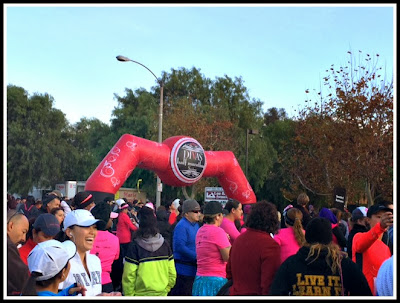 The race started the Ontario Convention Center so the runners were able to use the "real" bathrooms inside the Convention Center and keep warm until the race started. This was indeed the coldest race that I have ever ran. It was about 37 degrees at the start and I was a little worried about how my body would respond to the cold. 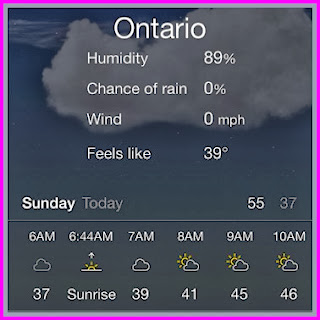 I wore pants and a long sleeved shirt with a tank underneath and I did not take my shirt off until Mile 10. Normally, any layers are off by the first mile because I warm up really quickly when I am running. We all wore matching pink tutus which made it really fun! We all planned on staying together for the entire race with no set pace in mind. 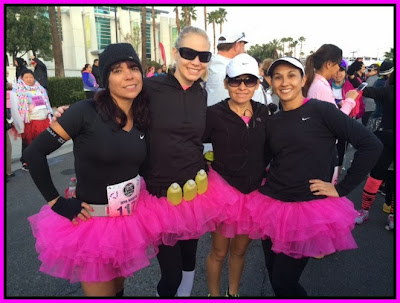 Around Mile 2, I noticed that my friend was not with us and she had dropped back. We did not see her until the first turn around and she was quite a ways behind us. I told the others to go ahead because I was going to wait for her at the next water stop since I was not sure if she was going to be okay on her own. She spotted me at the water stop and from this point on, it was just the two of us. She had her music on so we did not talk much but I was entertained by all of the pink and cute costumes out on the course. The course is not a very scenic one but since it is close to the mountains you do have that view for most of the race. I also spotted Linz from See Sharp Run around Mile 6 and asked him to pose for a photo. 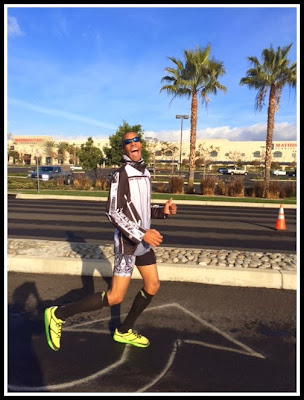 We saw the rest of the our pack at a turn around near Mile 9 and we cheered each other on. They were pretty excited to see us as you can see. 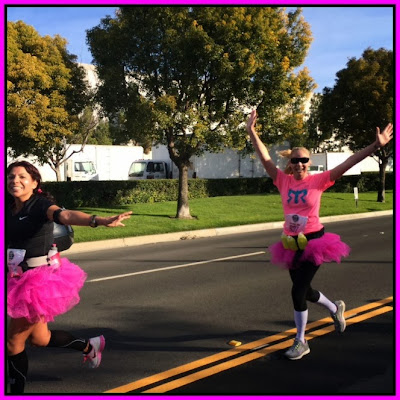 Mile 12 was the roughest mile for my friend because she knew that her husband was not going to be waiting for her at the finish line. She wanted to quit but I encouraged her find the strength to finish the race for him and she did. 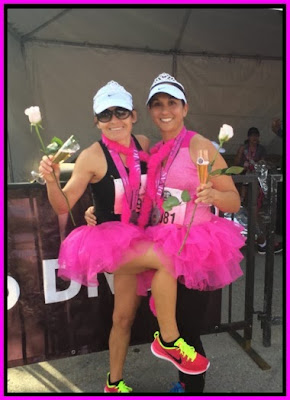 We finished the race together and waited for the others to come in. We finished in about 2:02 and my other friends all finished within a few minutes of us. 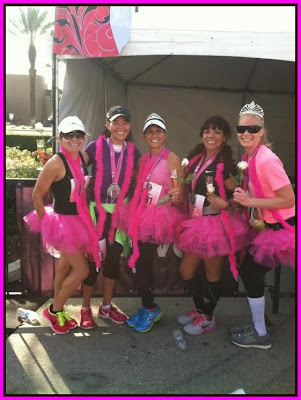 There were lots of fun things at the finish including crowns, tiaras, roses, sparking apple cider and of course medals which were handed out by muscular men  in jeans with no shirts! 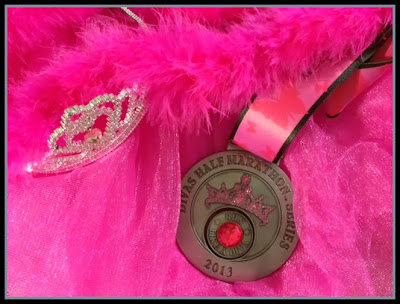 I am not sure how those poor guys were surviving out there in just there jeans because it was only 45 degrees at the finish! We took lots of fun photos together and I have to say that it was a very well organized race. I would definitely run this race again..in pink and a tutu that is!

How often do you run races just for fun?

Anybody else run a race this weekend?
Posted by Boston Bound Brunette at Monday, December 09, 2013