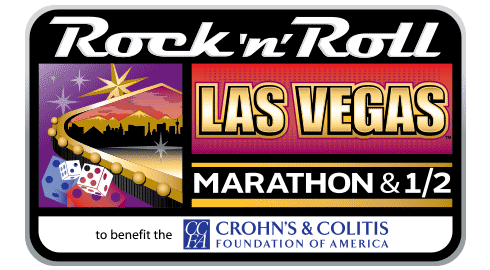 We really enjoyed the race because it was our way of celebrating our 15th anniversary. We were looking forward to the little getaway even if it was just for a few days. We arrived in Vegas on Saturday afternoon and headed over to the expo right at the Las Vegas Convention Center. 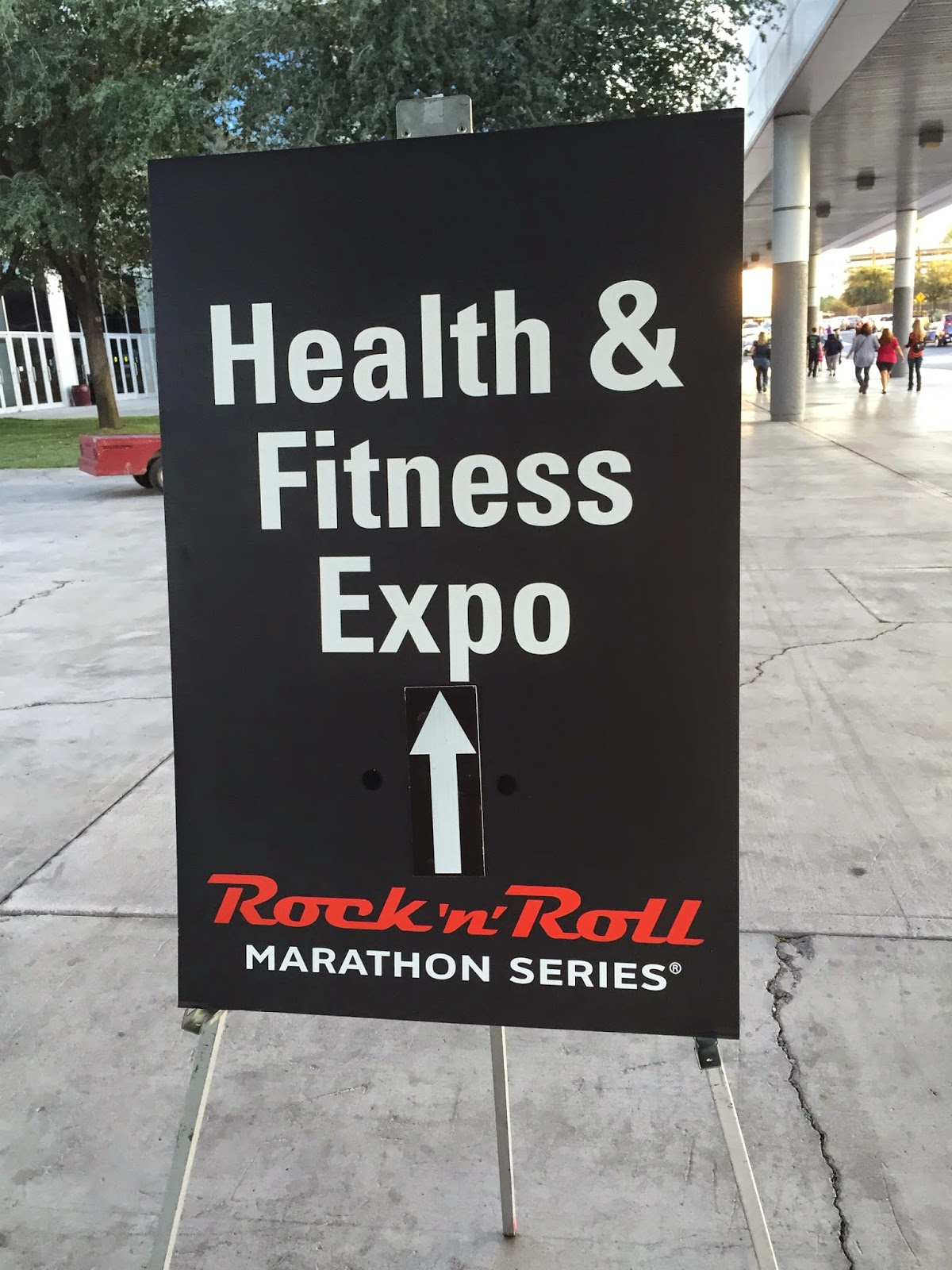 We picked up our bibs and quickly found the KT Tape booth. He got his calf and ankle taped and I got my knee taped. We were both kind of a mess so this made life a little bit easier.  I will talk about that topic later. Overall the expo was an easy and fast pick up and very organized. 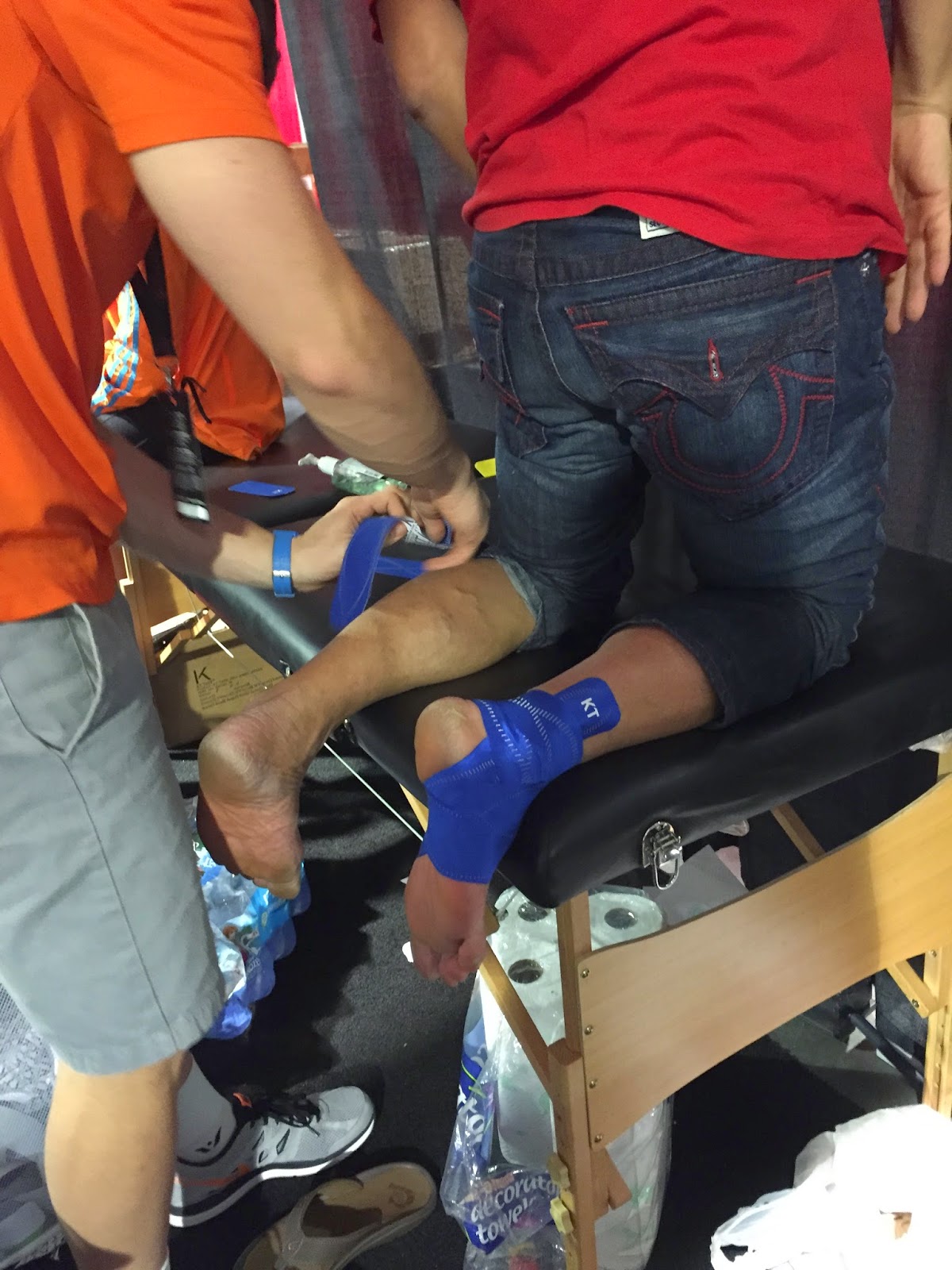 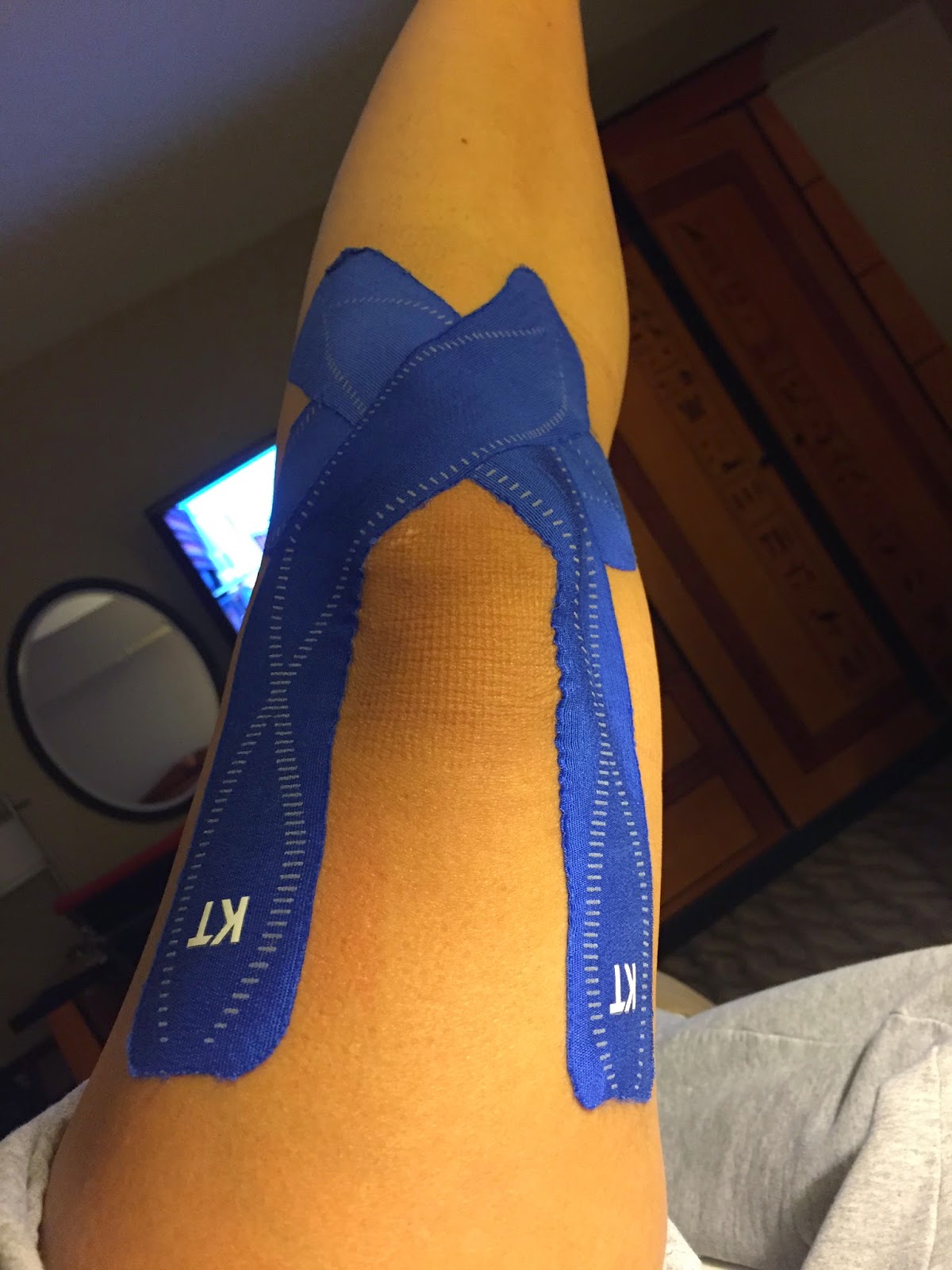 We had originally signed up to run the full marathon but my other half changed his mind. We tried to change to the half a few weeks before the race but they told us to just run the half and the timing chip would automatically pick us up as running the half. It did so I guess it works. 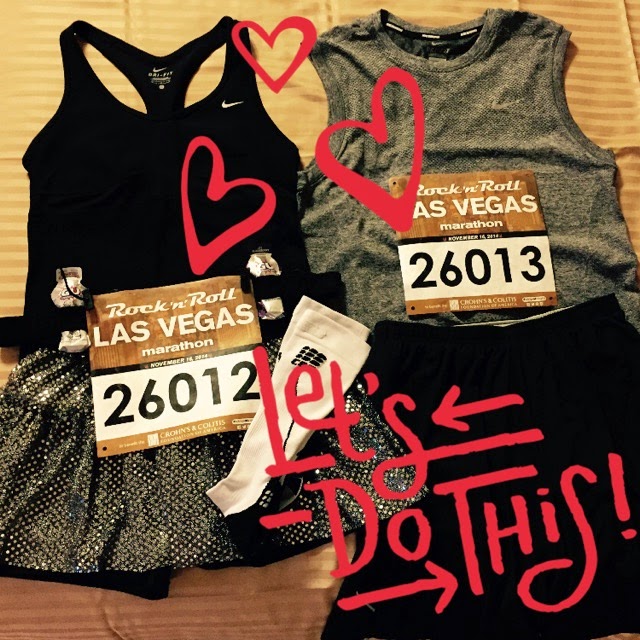 This was my first night race and it was a different experience. I wasn't sure how to fuel before the race so we had lunch around 11:30 am, had a small snack in between and then ate bananas right before the race started at 4:30 pm. 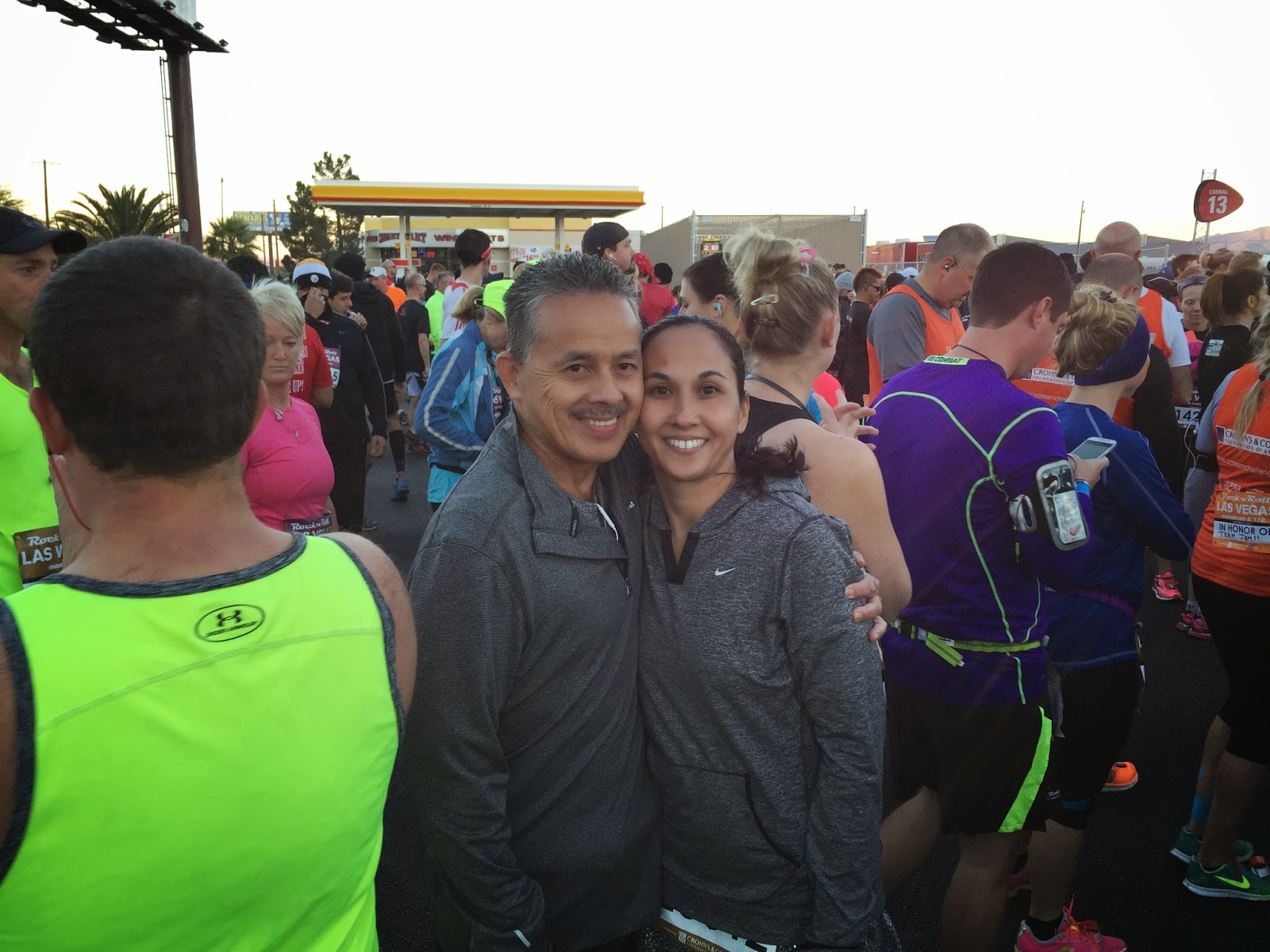 It was cold at the start. We had to take a potty break at Mile 3 because we were cold. It was also a little windy at times during the race. 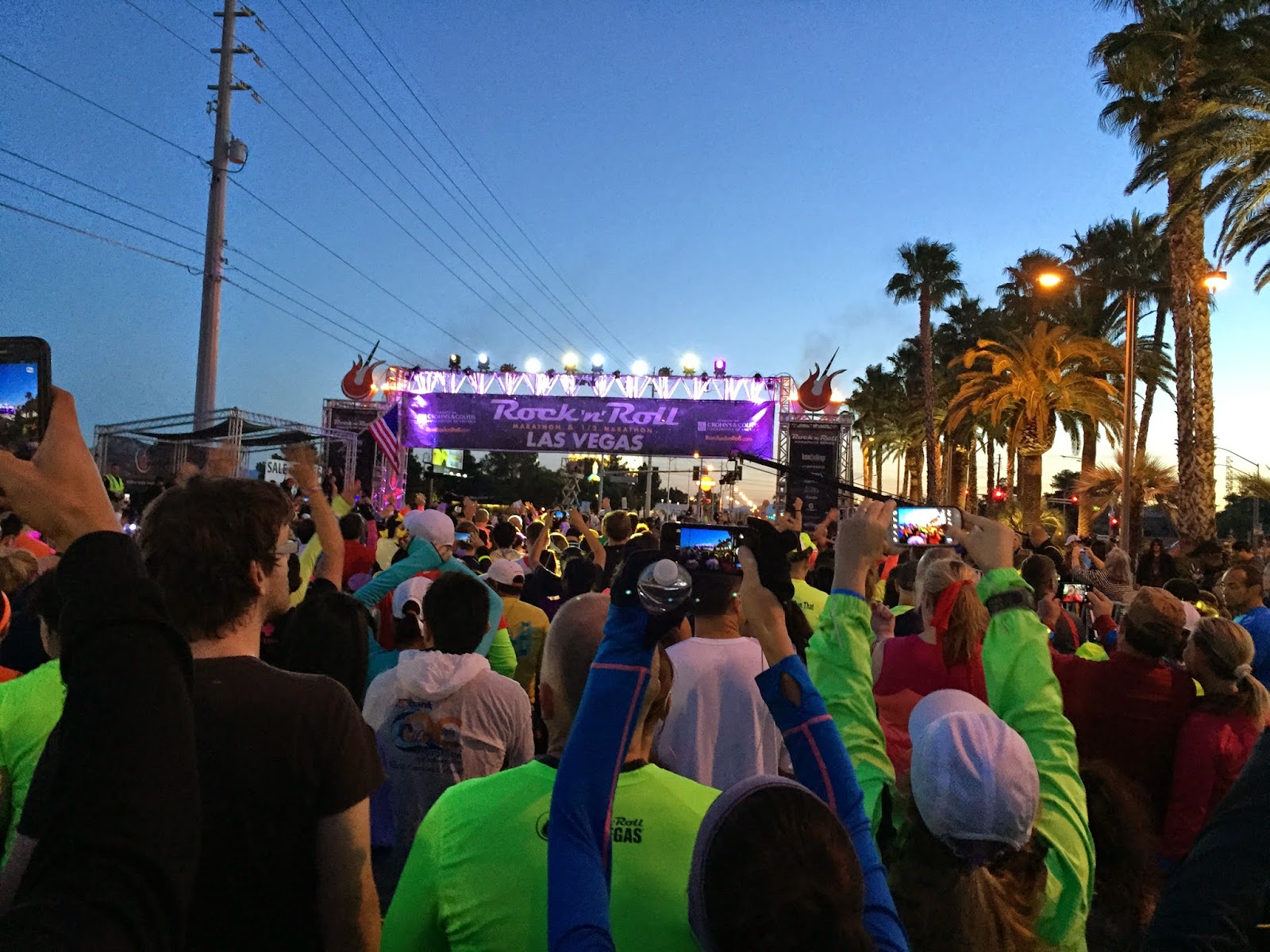 There were like 4o corrals and they counted each one of them down and released them one at a time. We started in corral 14 so it took us about 20 minutes to cross the start. By Mile 3, we were pretty warmed up and we ended up taking off our jackets for the remainder of the race. The course has a small incline from Mile 9 to the finish so I slowed down a bit because I was worried about my knee. We kept a 10:00 pace for most of the race and that felt comfortable.

The course was pretty crowded the entire time. We were weaving around runners the entire time and I was surprised at how many people who started in the same corral as we did were actually walking. It made it difficult for others. I am not sure why people do not start in the correct corral. The time went by really quickly because the course is never boring. Most of the race is on the strip and there is lots of lights, lots of crowd support and bands for entertainment. 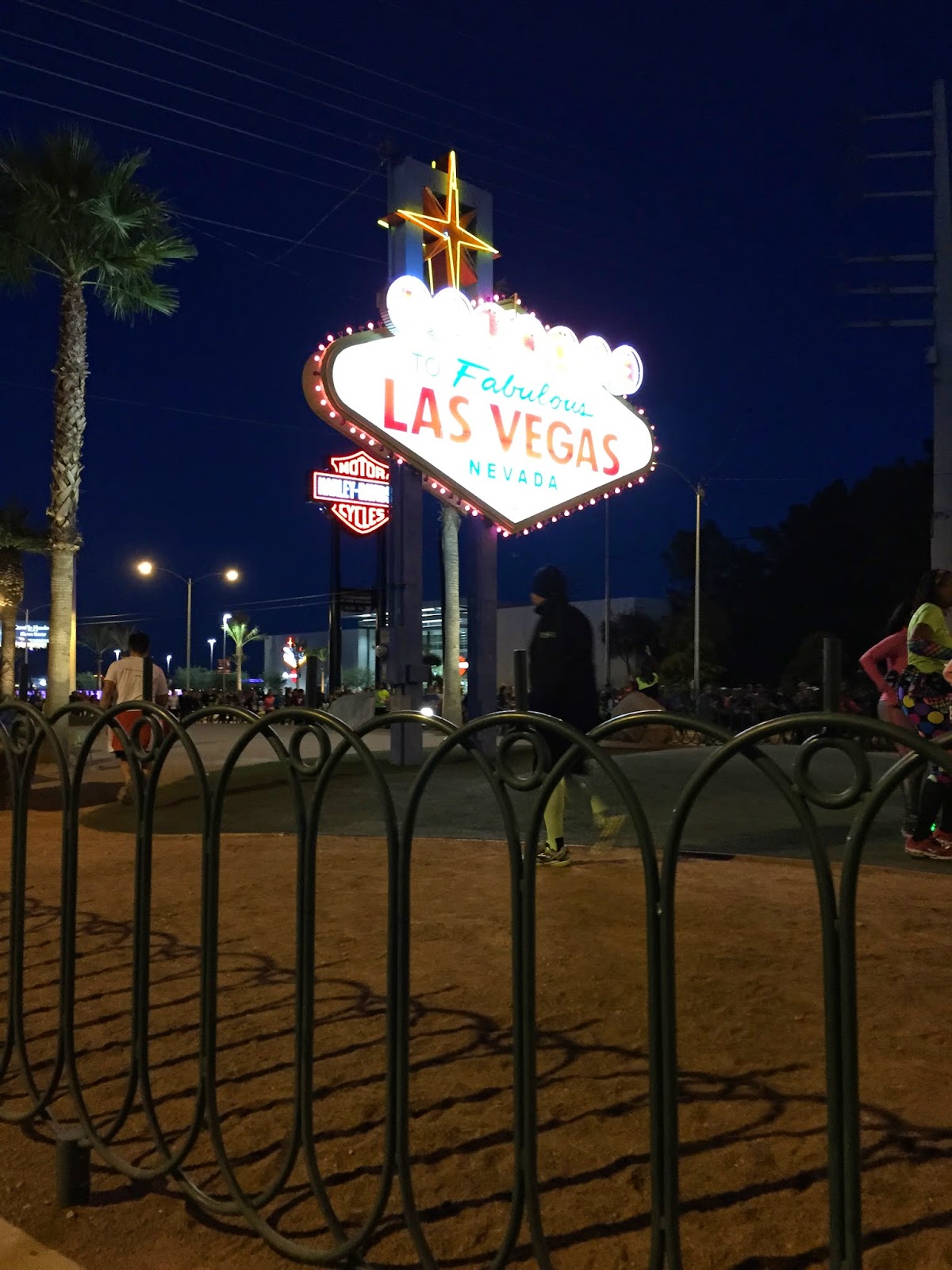 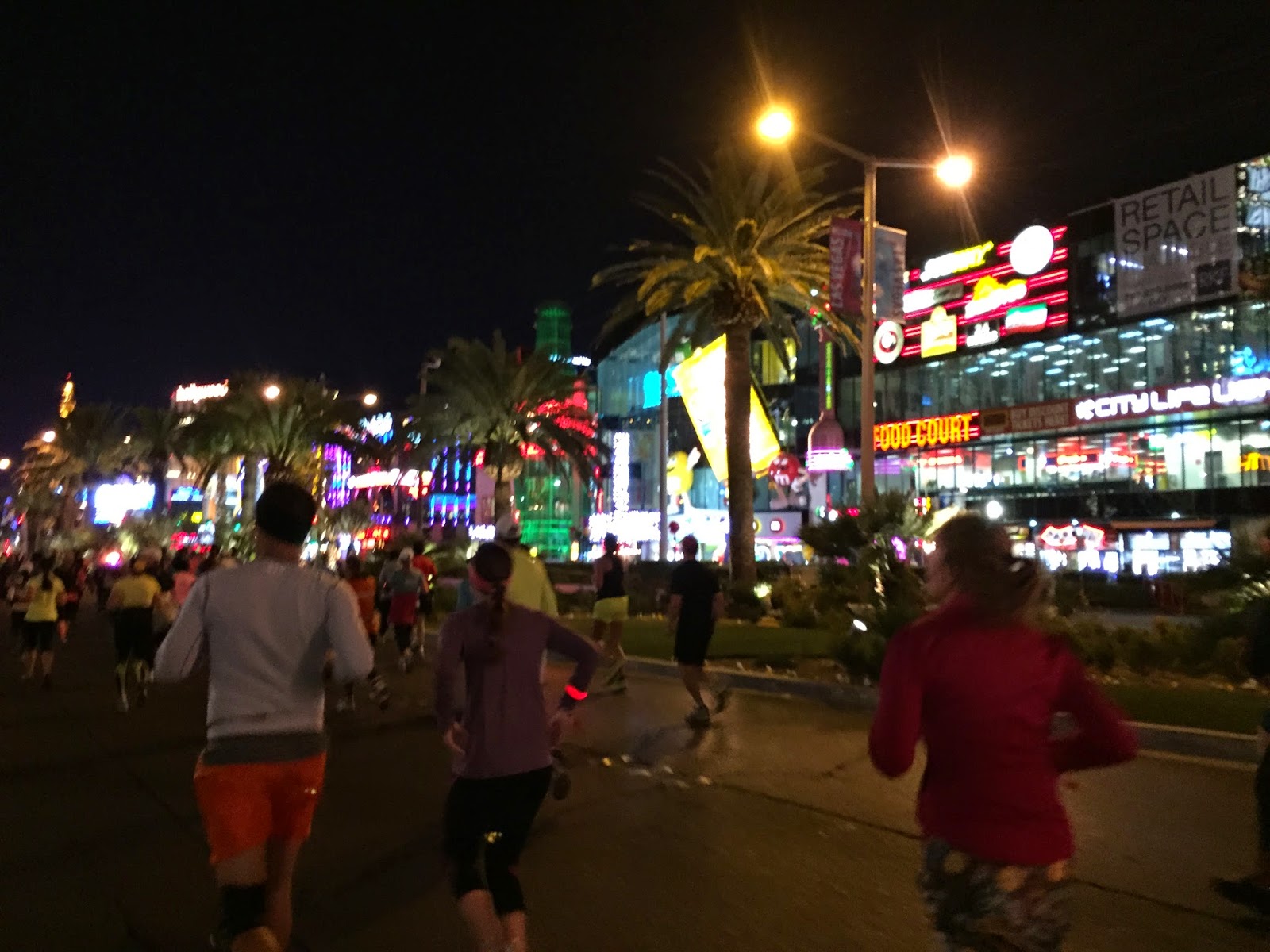 My other half did really well. He never walked like he thought he was going to need to do and he felt strong the entire time. I think he could have done better without me but I told him that I didn't want to push it because of the knee pain that I have been dealing with for the past few weeks. My knee felt good the entire race but I grabbed some ice for my knee at the finish because I was afraid that if I didn't I was going to be in trouble. 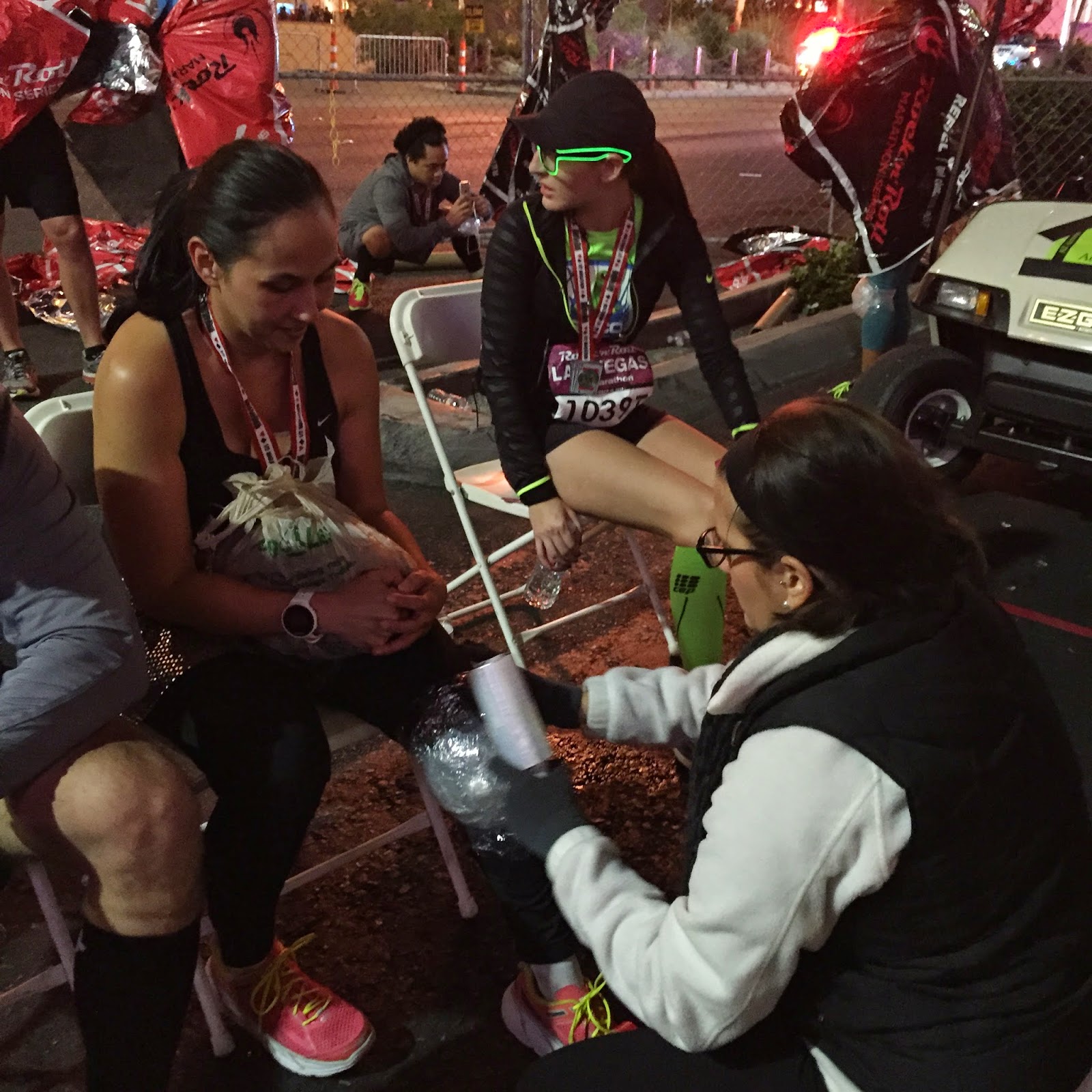 The snacks at the finish line were great. They gave chocolate milk (my favorite post race drink), Gatorade, pretzels, beer, Justin's nut butter, Pure Protein bars and bananas. The food wasn't bagged so it was hard to carry it all if you didn't have a bag. 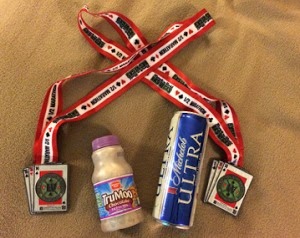 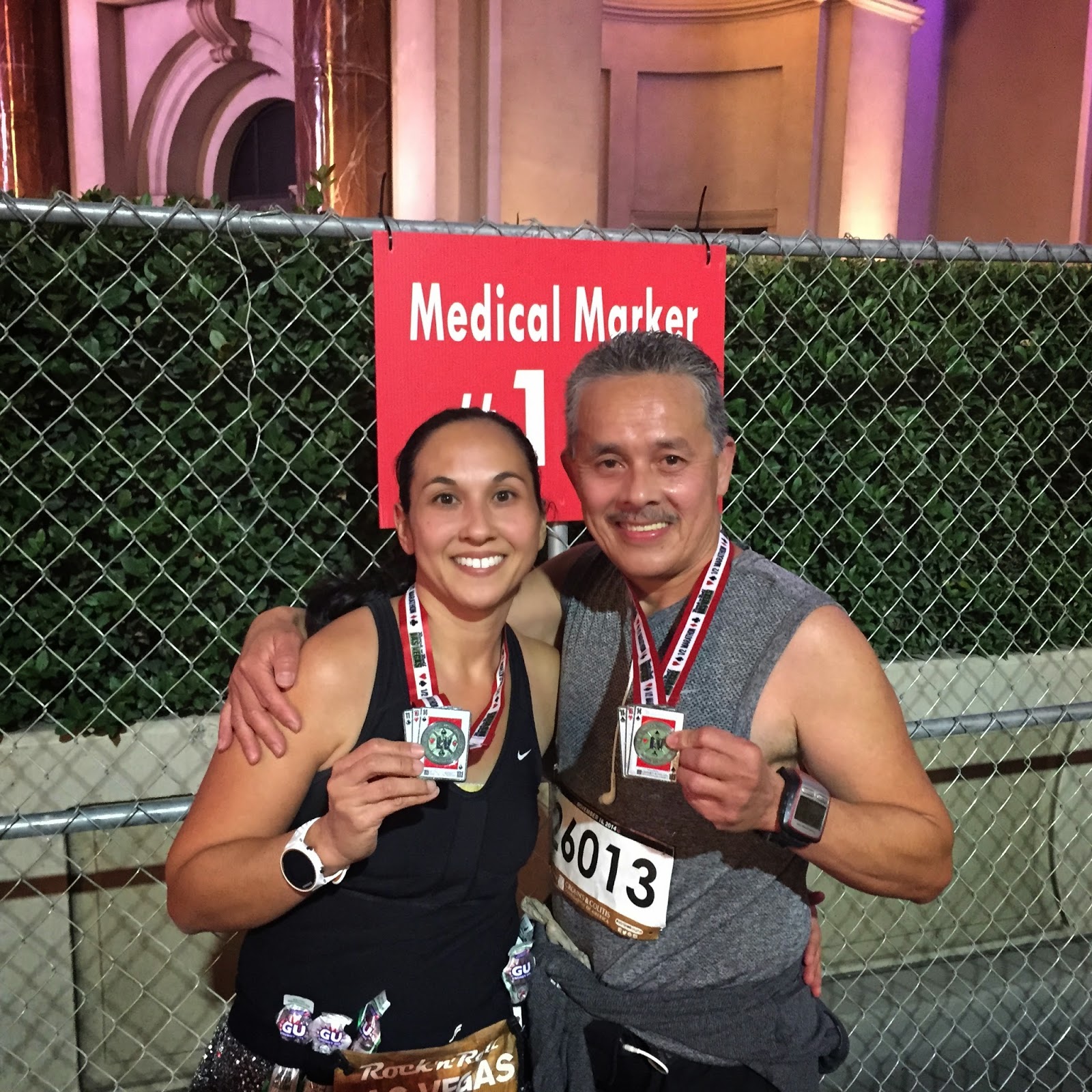 We finished in 2:13:22 and I was very grateful to have been able to run this race. My other half doesn't care about time so we were really able to enjoy this race. The medal is nice and heavy and I think it even glows in the dark. The race was well organized and had plenty of water stops, porta potties and course entertainment. We would definitely run the half marathon again but I am not sure if I would enjoy running this full marathon at night because a large portion of the marathon course is off of the strip and I heard it gets dark and lonely out there. 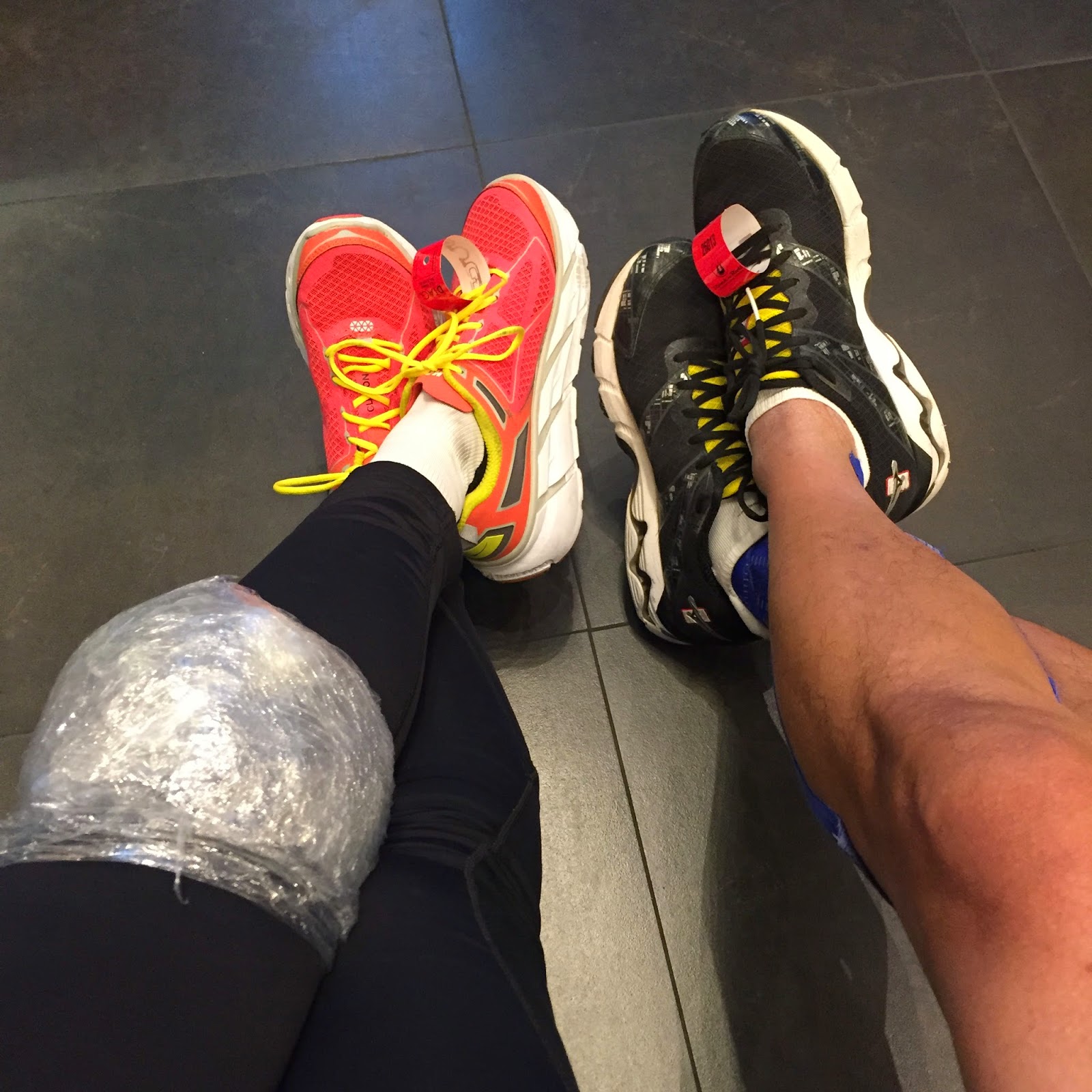 It was about a 4 mile walk back to our hotel and it was cold. I was really glad that I decided to run in pants and not my shorts. I would have froze on the way back to the hotel had we not stopped at a Starbucks for a little break. I think the hot shower I took after the race was one of the best showers ever!

Have you ever ran a night race?

Do you run with your significant other?

Email ThisBlogThis!Share to TwitterShare to FacebookShare to Pinterest
Labels: Chocolate Milk, Couples that Run Together, Half Marathon, Hoka One One Clifton, Las Vegas Rock and Roll Half Marathon, Race Reports