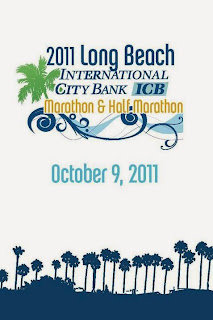 Weather Report: 58 at the Start and 75 at the Finish 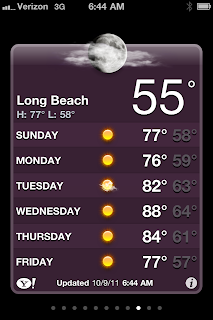 The Course: The course was pretty flat and Miles 17-18 within the Cal State Long Beach campus are a little hilly but not that bad at all. They just sneak up on you when you are starting to feel the pain!

The day had finally come and I was ready for it but a little worried about the Achilles tendinitis that had struck me one week before the race.  I decided that I would run the marathon regardless of the pain because it was not bad enough to stop me.  I got my carbs loaded in at Olive Garden the night before and took advantage of the never ending pasta bowl for $8.95!  I also visited Whole Foods for the first time and realized that a small box of hot food can cost you $10.00 if you aren't paying attention!

I had all of my stuff laid out the night before so I wouldn't be all stressed out looking for things in the morning.  I wore something nice and bright so that my husband/photographer and my son/biggest fan could easily spot me.  This outfit looks like something from the collection of Neon Blonde Runner! 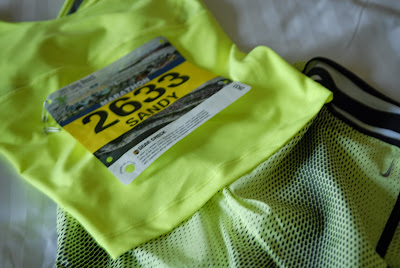 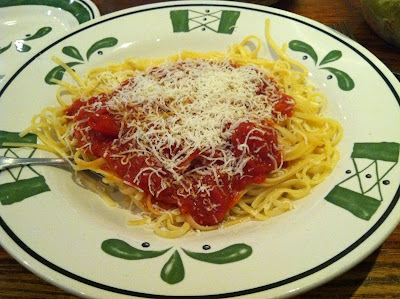 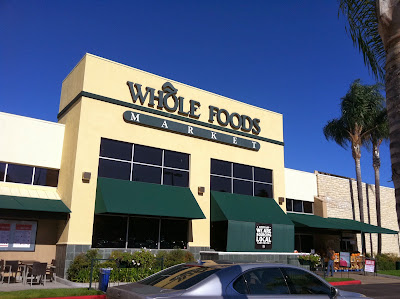 I ate a banana and half of a bagel and headed to the start which was a hop skip and a jump from our hotel. The weather was beautiful at the start at 6:00am but come 7:00am that sun was out and it warmed up quick!  I attempted to put my headphones into my iphone before the start and to my luck my head phones were not working..bummer! Not a good sign since I use my music to carry me through the rough times! Note to self: try out headphones prior to race day! I was feeling pretty good at the start..nervous but ready!
The course was great and very scenic.  I really enjoyed it! My favorite parts of the course were running by the Queen Mary and the bike path next to the  ocean/beach. There was a really cool breeze and it was very refreshing.  There were some really young kids running the half marathon and I thought it was pretty cool to see them running such a long distance.  The uncool part was watching them breeze right past me!!

My husband/photographer and my son/biggest fan were there with me at the Start, and also waiting for me at Miles 5-6 and the Finish.  They made me another awesome sign too!  My son made good use of the chair he insisted that I buy him from REI! He hopes that one day I can pick up the pace so he won't have to cart that chair around with him anymore! 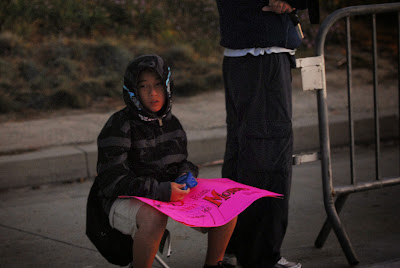 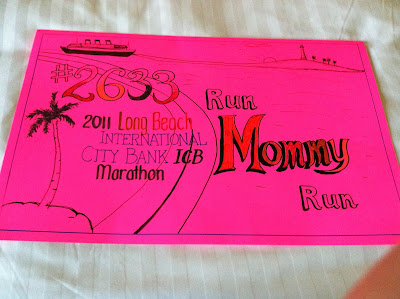 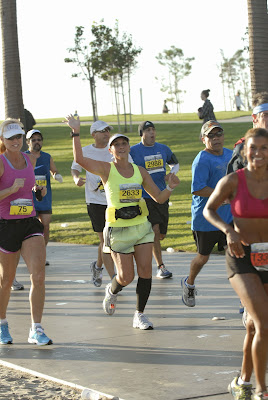 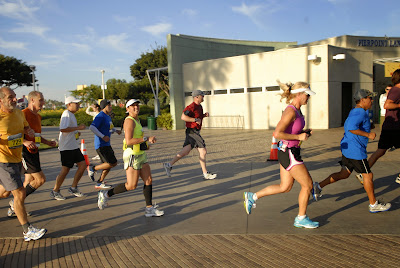 My achilles stopped me from even setting any real goal for the day, but in the back of my mind my goal was to run even splits of 9:09 and pick it up in the second half if needed, or should I say if I was still able. 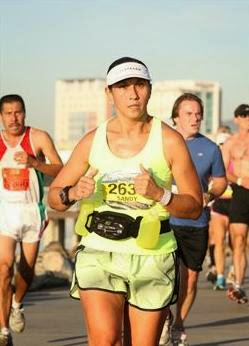 Although I started to feel a little discomfort in my leg at Mile 15, the first 18 miles were great. I GU'd at Miles 6 and 13 without really feeling that I needed to. I wasn't feeling tired at Mile 18 and I still had the energy to keep going. strong. It was definitely getting warm and I was keeping myself cool by dumping water over my head at the water stops. The volunteers were nice enough to throw water all over me too and then my shorts were glued to my rear!  That didn't feel real comfortable!

I knew that the fatigue would start to hit me around Mile 20 so I was prepared for that to happen but I was not prepared for the pain in my Achilles to hit me so suddenly and unexpectedly when things were going so well!  Shawna/Bandit was waiting for me at Mile 20 but as I was approaching Mile 17 I saw her and yelled out her name and she ran across the street and joined me.  She had no idea that she was joining me three miles too soon!  She thought I was doing great and had already reached Mile 20!  I wish!! Just to clarify, Shawna did pay her registration fees but had to pull out at the last minute due to an injury which caused her to miss too much of our training so she's not really a true Bandit. She does have a bib number!
The course was really flat for the most part and the elevation at Mile 17-18 was not as bad as I thought it would be. Those minor inclines changed things for me and were just enough to aggravate my Achilles! I GU'd again at Mile 20 and it didn't kick in! Shawna was being really supportive and hung in there with me. I was able to somewhat keep my composure up until Mile 21 and then I quickly fell apart!

The crowd was great but I was so off focus that I wasn't able to  use their energy to push me to the finish line. The crowd in Cal State Long Beach was the best ever and I think I heard my name about 25 times while I was running through the campus.

The 4:00 pace group passed right by us at Mile 24 and it was tough watching them head to the finish when I had been ahead of them the entire race!! I did the best that I could to keep moving the last two miles and thank God that the last couple of miles were down hill!  I sucked it up and  headed to the Finish with my tail between my legs!  It just was not my race and I am still trying to process all of this today! I was on track for a sub four finish and didn't deliver! Shawna was a great support system for me and tried her best to keep me focused in spite of the issues that I was having.  Shawna told me that she uses profanity, gets really mean and cries when she hits the WALL so if I ever run a race with her, I will be running off the course when she starts cussing me out and hitting me!
Shawna exited to the left as I approached the Finish Line. When I looked up and saw the clock at 4:05:35 I wasn't a happy camper.  My watch was showing 4:02:20 so I am not quite sure what happened to my watch during the mess of those last 5.2 miles. My current PR is 4:05:16 and it was pretty painful to miss a PR by 20 seconds.  Even one second would have made me feel better after struggling like I did! I would have powered through it had I not screwed up the time on my Garmin and been aware of what my time really was! My watch had either lost connection or lost it's mind along with me!  It was more than three minutes slower than the official time and I didn't know that until I was crossing the finish line! I have not participated in too many races but the previous two races that I did run have the time posted at each mile marker and I usually compare to make sure that we are on the same page. In any case, I screwed up big time with the whole timing thing! 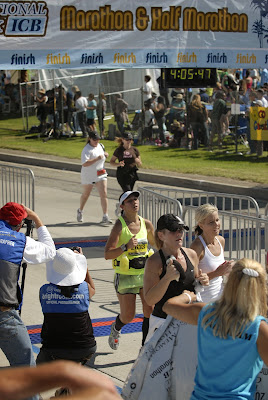 In spite of having a less than perfect race and earning a PW, I didn't let that stop me from making up excuses to eat!  I was in the mood for an In and Out cheeseburger, fries and a vanilla shake.
My son and my husband managed to drink 80% of my vanilla shake for me so I decided to make up for the loss of sugar with these! I only ate two..not all three! 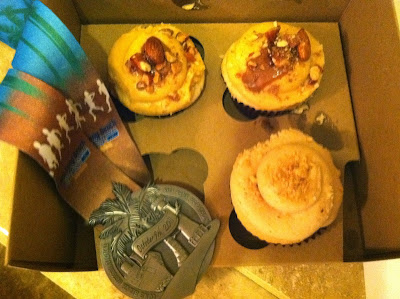 Most people don't even think of running a marathon the day after they finish one, but I did!!  I wanted to go back and fix what happened and make it right but I know that I can't do that and I have to accept defeat when it happens.  I don't like to fail and it's hard for me to swallow!!  All of the elements of a good race seemed to be present for me on Sunday. I can't blame the warm weather, the minor hills of the course, the pain, the nasty blister on my toe, my malfunctioning head phones or anything but myself. It wasn't my race and it wasn't my day!

So what did I learn from this race? I learned that I need to stay focused on the race and my goal. I could have handled this race so many different ways and I think my way of dealing with it was not the best way. I know that Boston is a long ways away for me and I must train harder and push myself harder!  I also need to realize that every race that I run will not always be my best race.  Running a marathon is tough and if you can finish one, you have accomplished something that most people will not experience in their lifetime! I admire Shawna for always bringing me back down to earth and reminding me of these things.
So, unlike this guy, I will be taking it easy this week... 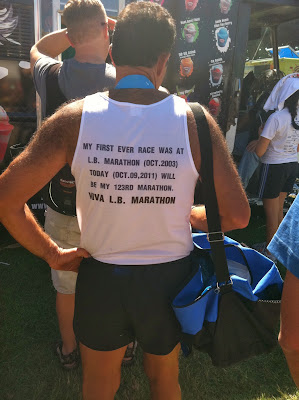 and spending a lot of time with these three guys... 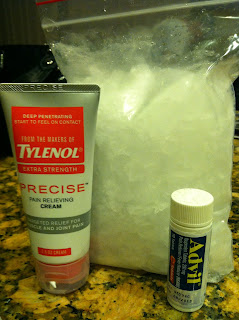 I have been doing a lot of this too...with Buster. We still have Buster hanging around the house and nobody has claimed him since he ran all the way home with me last Tuesday! He seems to like it at our place if you haven't noticed! 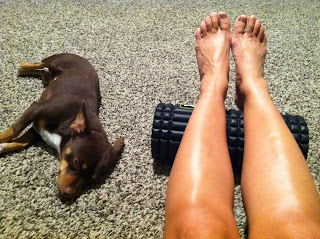 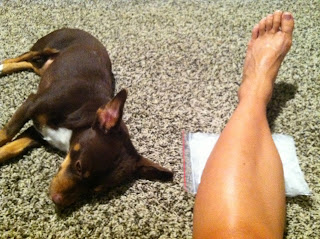 No marathons on the Race Schedule for the remainder of 2011.  I am going to try to enjoy the holidays and run a few small races just for fun! Congratulations to everyone who ran Long Beach and Chicago on Sunday.  We are all winners!!

I've got three words for you Long Beach...I'll be back!!
Posted by Boston Bound Brunette at Wednesday, October 12, 2011