I have always kind of avoided running 5K's because I am a slow starter and need time to get my body going. Having that said, I was thinking that my 5K finishing time would be disappointing so it may not be worth doing.  Since I have been mentally kicking around the idea of signing up for a 5K, I finally gave in and signed up for one.  I registered for a really small, local race with 906 total participants.  The race was held in memory of Matt Myers, a Cal Poly student who was hit by a car on the campus. 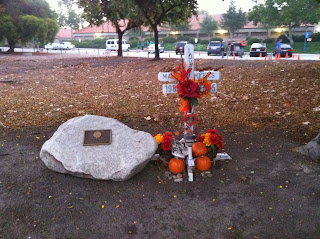 The race also benefits a scholarship fund for Cal Poly Pomona students so those were the main reasons I decided to participate.  Did I mention that it was only $15.00?  They gave t-shirts and a tumbler but medals were only given to the top three finishers in each age group. 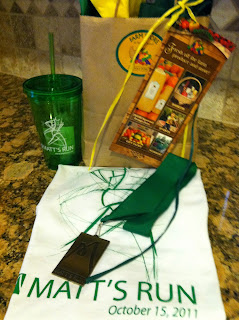 The race was scheduled to start at 8am so I left my house at 6:30am to get some oatmeal at Starbucks before the race.  I arrived at the campus around 7:00am and sat in my car and ate my breakfast.  It was a short two minute walk to the registration area, which was nice, so I picked up my bib and waited it out. The weather was pretty cool, about 60 degrees, and the sun was still hiding behind the clouds. The campus is very hilly so I was kind of prepared for a somewhat challenging course. 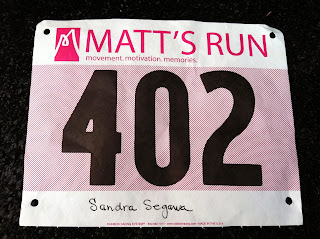 They announced that the race was going to start ten minutes late since they had lots of late registrations so I took one last trip to the bathroom.  It was a real bathroom too...thank God because I hate the portables!
﻿﻿﻿
﻿﻿﻿

﻿﻿The first mile was uphill and it worked me out to say the least. My pace up until the steepest part of the hill was 7:30 but I didn't want to kill myself so I slowed it down. I lost a lot of speed getting up that hill and ended up at 7:54.  I grabbed a cup of water from the one and only water stop on the course, stretched out my injured leg and kept going. Mile two started to descend so I was able to gain some of the lost time back and closed out mile 2 at 7:30.  The last mile was the hardest because I was already feeling a bit tired and thirsty!  I usually carry my own water but since it was only a 5K I figured that I could survive without it.  I gave it my all in the end and closed mile 3 out at 7:43.  I finished in 24:16.  One of current Running Goals is to complete a 5K in under 24:00 so I missed that goal by 17 seconds.  I wasn't at all disappointed because I didn't have any real expectations in mind with my achilles still feeling a little tender. I was actually prepared to walk if I my body told me that I needed to. I grabbed some water and some oranges and rested for a minute. They also offered free hot dogs but I am not a big hot dog fan so I passed. 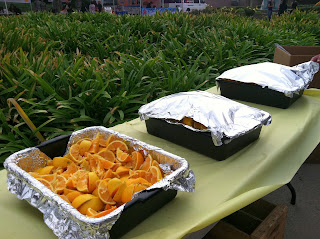 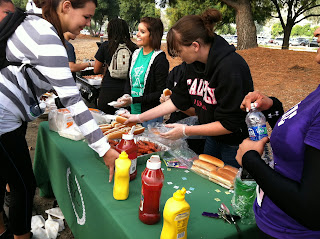 I stuck around for the awards ceremony since they were raffling off an iPad 2 at the very end.  I watched the military guys doing push up and sit up contests to pass the time since I was by myself. 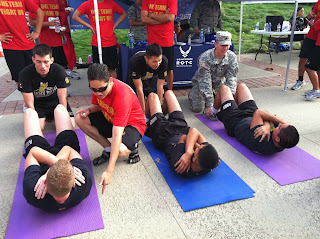 Unfortunately I didn't win the iPad 2 but I did finish first in my age group!! I was super shocked when they called my name since my time was not very impressive!! I feel like I got lucky because it was such a small race but hey I will take it. It's always nice to add another medal to your collection! I need some positive reinforcement in my running world after my disappointing finish in Long Beach last week. I am not sure if I should count this one or not, but one of my Running Goals is to win a race in my age group and I did! I think I will count it since my running moral is kind of low right now! 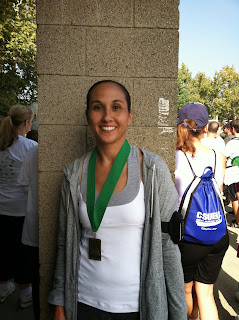 I decided to treat myself to Yogurtland after the race.  I sampled just about every flavor they had since I had never been there before.  Every flavor was so delish but I ended up going with Red Velvet Cupcake Batter, Devil's Food Cupcake Batter, Mango,  and Pistachio. I added pecans and walnuts on top and it was so yummy.  Yogurtland was really reasonably priced so I think I will take a break from my expensive cupcake habit and try the fro-yo thing.  There are so many other flavors that I want to try the next time I go....which would probably be tomorrow! 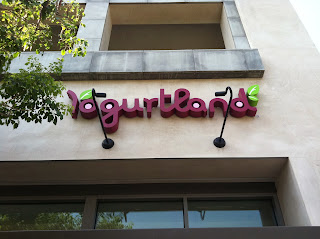 Have a great week!!
Posted by Boston Bound Brunette at Sunday, October 16, 2011