There are a few good reasons why I chose to run the Holiday Half Marathon: it was close to home, I wanted the cute Snowflake medal, and I wanted to dress up in a cute Christmas outfit and have fun...and that's exactly what I did!!

Weather Report: 43 degrees at the start..brrrrrrr!!

The Elevation Chart of the Course not only looked like an EKG Chart but was a little intimidating at first.  I usually get excited when I see that the course is somewhat flat but if you look closely the inclines are really small and there is a lot of downhill action going on too. The course what not as bad as I thought it was going to be so that was a bit of a relief. 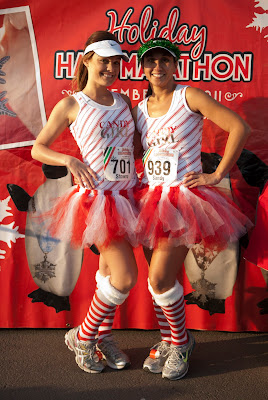 Shawna and I received so many nice compliments on our outfits.  Neither one of us had ever ran in a tutu before and they didn't bother us at all just in case you were wondering.  I didn't even notice that I had it on but then again I am used to carrying a million things with me when I run. I have no idea where the tank tops are from because they were Christmas gifts so I felt bad having to tell people who asked that I honestly didn't know where they could buy one. 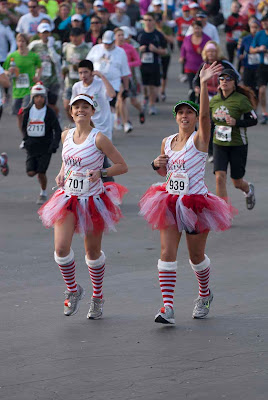 We started in the back of the crowd so we spend the first two to three miles weaving and that was not fun. There were a ton of walkers and they were in the middle of the course walking like it was no big deal. After mile three, the crowd started to break up and that's when the up and down hilly pattern began. So many runners were dressed up in Christmas attire so it was a really, really fun race. Everyone was super friendly and I think we even got called Candy Canes a couple of times! I spotted other runners dressed up as Gumby and the Grinch. I also noticed lots of colorful tutus and Santa outfits.

Miles 4 through 6 went pretty smoothly and we were both feeling pretty good.  Right before Mile 7, Shawna's driver's license, which she made a special call to her Mom to bring to her so she could have her beer at the finish, fell out of her belt and she had to stop and wait for tons of people to pass so she could sneak in and pick it up.  We lost a little bit of time there.  We picked up the pace to recover some time in Mile 8 and then we hit a major issue at Mile 9... I won't provide the gory details of this issue because Shawna will kill me.  Let's just say that Shawna now knows that kettle corn, Wahoo's, pasta and a giant cookie is not the proper way to fuel before a race!! 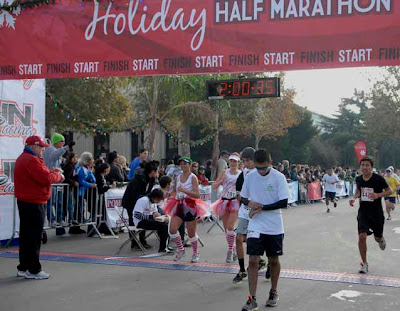 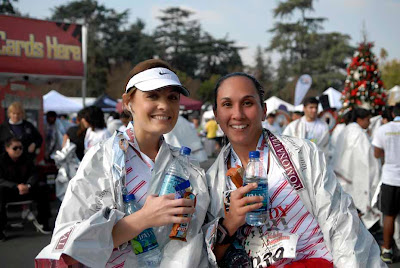 Miles 10-13 were pretty strong and our last mile was our best mile at 8:09. We grabbed our post race goodies, took some pictures together and then headed over to get our free beer.  I am not a drinker so Shawna really wanted to watch me drink a beer. Yes, I gave into the peer pressure and drank the beer with her. I actually finished mine before she did. 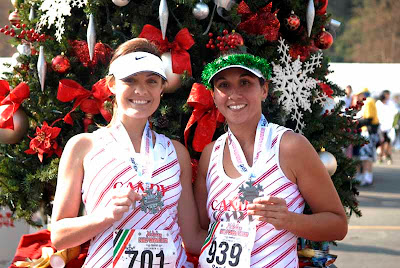 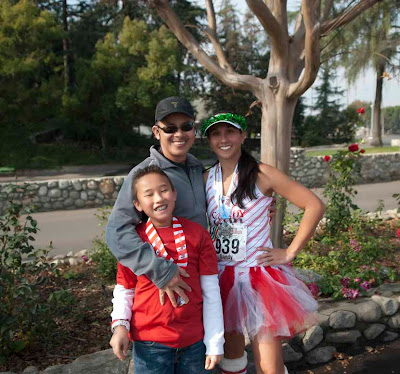 We headed over to IHOP to have some breakfast and looked at the race photos that my husband took of the two of us and laughed at the crazy expressions on our faces.  My son kept Shawna entertained with his iPad and his newly acquired dance moves.  I think I even  caught a glimpse of Shawna doing the "Dougie" with him at the table. 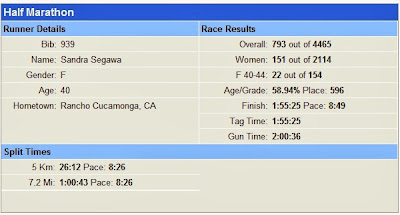 Here are the official race results in case you are interested.  Congratulations to Shawna on earning a PR!!  She beat her time by two minutes which is great! I am so happy for her!! She actually snuck up on me in the end and beat me too! This was my last race for 2011 but 2012 is going to be a busy year with lots of races on the schedule!  I can hardly wait!!
Posted by Boston Bound Brunette at Sunday, December 11, 2011