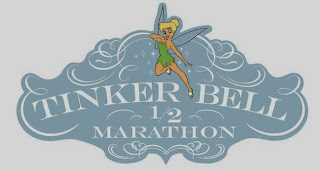 Health and Fitness Expo: We went to the Expo on Saturday and picked up my bib and a few other things.  I bought an IT Band wrap to try out since I suspect my problem is IT Band related. I also signed up for another marathon which is taking place at the end of the year and bought some super cute stuff for future races too. I bought some really cute leg sleeves for the Tinker Bell half that say "I Can Fly." 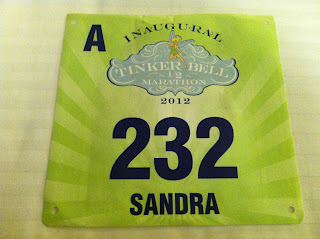 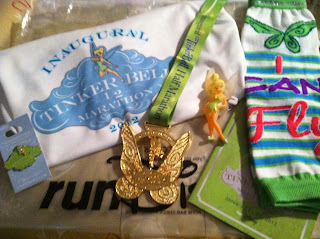 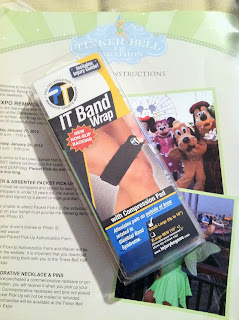 I also met Danica, who blogs over at http://chicrunner.com/, for the first time.  I follow her blog and loved her dream wedding so it was nice to finally meet her in person and say hello! She is super sweet and tolerates all of my nagging emails about upcoming discount codes for Run Racing events.

This race was one of the most difficult ones that I have ever ran both mentally and physically. I had been looking forward to it for a long time and since it was an inaugural race, I really wanted to be a part of it.  I went into this race not feeling 100%, with minimal training and the feeling of not knowing what was going to happen.  I had no goal in mind except to FINISH! I don't usually train too hard for a half marathon if I am keeping up with my weekly runs but this time around I  had not really ran at all in the last few weeks and I felt very out of shape to say the least. My mental game was a mess and without that in place I wasn't sure what to expect. I thought about selling my bib but I am not too fond of  having another person's time on my record and I was a little nervous about my future with runDisney.  I am not sure if they care or not or what the "rules" are but I didn't want to chance it since the Disneyland Half Marathon is one of my favorite races.


﻿﻿﻿We stayed at a hotel located very close to the start and finish which was very convenient.  The hotel had a perfect view of the Disneyland fireworks and the hotel provided a light breakfast in the morning. They charged us $8.00 for parking but Disneyland charges $15.00 so that wasn't too bad!! The parking situation was very chaotic since they had more cars in the lot than available parking spaces! Once you park, you better not leave or else you won't have a spot when you get back but we took our chances and went to Red Robin for dinner. I love the Whiskey River BBQ Burger and the Freckled Lemonade.  I didn't eat much of it but my son and my husband took care of the rest! I was pretty nervous about the race and I think my appetite showed it. I can afford to lose a few pounds from all of the running that I am NOT doing! 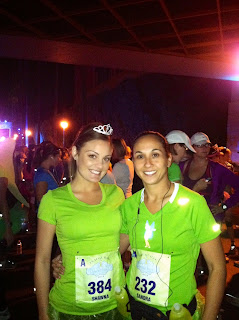 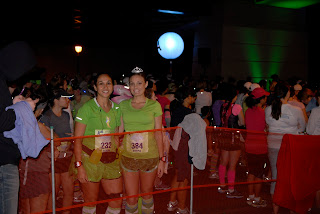 Shawna met me at my hotel room at 5:00 am and we walked over together. She made us some really cute Tinker Bell sparkly skirts to put over our shorts.  They are really shear so they might be hard to see in the pictures but they are super cute.  Thank you Shawna :) ﻿I ate a banana and popped an 800mg ibuprofen before the race and it had definitely kicked in because I was actually out there running.  It felt so good that I wanted to cry!  I could still feel the pain but it was tolerable and I wanted to run this race and earn the super cute medal so I sucked it up (put on my big girl pants) and focused on my music. I was as nervous as ever and the thought of an DNF really messed with my mind throughout the race.  I listened to my music the entire time and I don't usually do that at Disney races because there is so much to enjoy out on the course.

The course included some of the same streets as the Disneyland Half Marathon but most of it seemed different.  I did notice that since it was mostly women, the corral designations made a difference.  Although Shawna and I started in Corral A, we were weaving in and out of the crowds for quite some time which really affected our time.  We started in the back of the corral so that had a lot to do with it too. There was even some walkers in Corral A and in the Disneyland Half Marathon the runners in Corral A are pretty quick and will run you over if you don't get a move on it!!  There were also a couple of areas on the course where the pathway suddenly narrowed and you couldn't really move through the crowd.  I was a little frustrated about this since I wanted to run my best while I had the energy and the pain was minimal.
I don't recall much details about the course and I missed my husband at almost every stop he was waiting for me!  I was just too focused on finishing and didn't really care about much else.
Shawna and I ran the first six miles together.  Before the race I told her that if she was feeling good that she better leave me behind and handle her business and I would "See Her at the Finish Line."  At about Mile 6.1 we parted ways and off Shawna went.  I could see still her for the next few miles before I officially lost her or I should say she lost me! Smart decision on her behalf because I am sure she didn't want to be part of the PW that was about to take place!

I finally saw my husband and my son at Mile 8.5.  He snapped a few photos but I don't want to know how I looked. I am sure I looked like I needed some wings and some pixie dust to finish the race!

Miles 10, 11, 12.... were pretty painful and I was feeling pretty tired.  I did a lot of self talking and coached myself to the Finish.  I rarely looked at my Garmin because I knew that it was not going to be a stellar finish by any means!  I never really pushed myself and just went with what I felt and what my body was able to tolerate.  I saw my husband again right before Mile 13 and I definitely don't want to know what I looked like then either!! I usually push it the last mile but I didn't have it in me this time.  Once I spotted the finish line, I pushed myself just a little but it wasn't much at all. I wasn't aware of my time until I crossed the finish line and I don't even remember what the clock said! My official time was 1:58:09 which is the slowest half marathon in the books but it was great to be able to finish! I am so thankful for that. 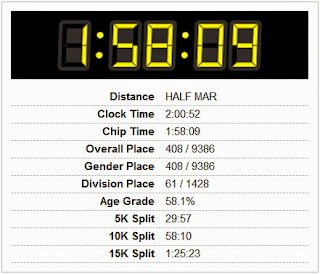 I didn't walk at all and most of all I earned my super cute Tinker Bell medal.  I have no excuses and I gave this race everything I had considering the current conditions. Shawna finished a few minutes before me and was feeling strong throughout the race.  I really wanted her to PR but I think she may have missed it by a hair. I guess she should of ditched me sooner! 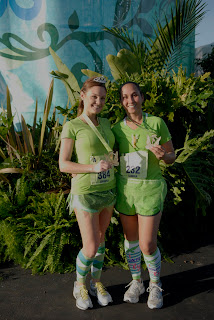 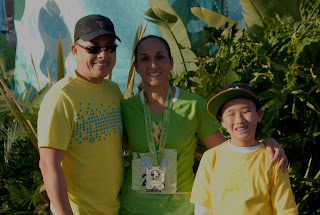 My son was pretty wiped out as you can see.  He said his Dad ran him all over the city of Anaheim hunting me down on the course so he felt that he should get credit for running the half marathon too! The dogs had to stay with the babysitter so they were pretty happy to be back home too. 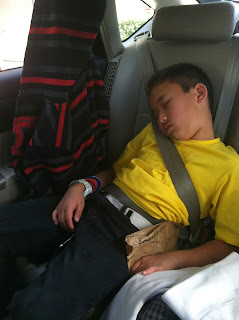 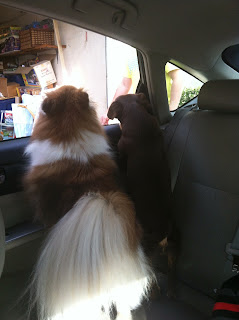 If you enjoy dressing up in costume and want to have some fun, this race is the perfect one for you. It's a pricey half marathon but Disney knows how to put on a well-organized race and on top of that the course is flat! Almost all of the runners were in costume and seemed to be enjoying themselves. There were a handful of men running and they had their wings on too! I will put this race on my "Run for Fun" list. I enjoy a fun run once a year where I dress up and have no worries about my time. It keeps me balanced and keeps the sport fun for me.

I hope I am still able to walk tomorrow! I am supposed to have an MRI next week to see if there is anything serious going on with my leg.  I am hoping for the best and praying that the doctor's diagnosis of a minor issue is correct. I don't think I should tell the doctor that I ran this race either!!

What are your thoughts on buying/selling race bibs?  Is this a big "no-no" in the running world or really not that big of a deal?

Have you ever tried an IT Band Wrap?  Did it work for you?
Posted by Boston Bound Brunette at Sunday, January 29, 2012