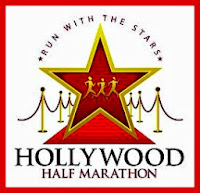 I wasn't planning to add any additional races to my schedule for April since Ragnar is two weeks away. My niece ran the half marathon and my nephew and my other half ran their first 5K. We got to talking about this race at a family birthday party and then all of a sudden I was in. How does that happen? I guess she must have twisted my arm and forced me to do it! I missed this race last year due to my injury and they got rid of the big hill in the end so I decided to do it. I also had a 14 mile run@8:30 in the plans for this week so I used this race in it's place. 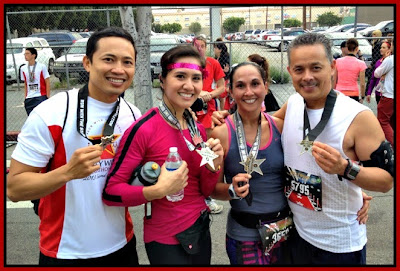 The expo is pretty small and we ran in and out to get our bibs and left. The parking for the expo is $20.00 which is outrageous! Then you have to turn around and pay outrageous parking fees on race day too! I was not happy about this. 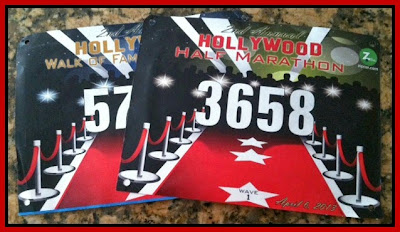 We woke up at 3:30am and left the house by 4:00am since the race had a 6:00am start time.Parking for this race was only available in parking structures which were within walking distance to the Start and Finish but cost anywhere from $12-25.00. We did our homework and found a parking structure close to the Start for $12.00. We had problems getting there and I don't recall seeing any kind of information on the website about street closures. So many of the streets were closed or right turn only so getting to the parking structure was pretty chaotic and frustrating. Apparently nobody else wanted to park where we did because it was empty. It took us about five minutes to walk to the Start from the parking structure. This part of town is kind of scary especially when it is dark so I would not recommend walking through this area alone!

There were very few porta-pottties but the lines were not bad at all when we got there at 5:00am. I read on Facebook that at some point these lines were crazy long and the runners were not happy. The corrals were clearly marked and they had race staff out there checking bibs to make sure that runners were in the correct place. This is nice to see but Corral One was completely full and I could not even get into it. The space they allowed for Corral One was very small but once the race started and the Elite runners took off there was plenty of room for me to slide in. 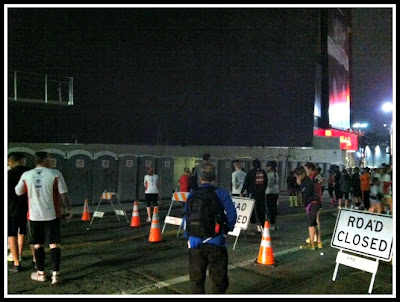 I heard there were lots of issues with the inaugural race last year, but I personally had no major issues with the race this year. I also read on Facebook that there were some issues with the shuttle service this year which was offered at the host hotel. Apparently there was a two hour wait for the shuttle and some runners did not make it to the Start until two hours later. By the time they started the race they were running with the street sweeper. NOT GOOD! Others decided not to wait for the shuttle and had to pay $30 to take a taxi to the Start. I think I even read that the hotel staff were unable to direct runners to where the shuttle pick up was located so there was some confusion there as well. The host hotel, were the expo is held is pricey and is not located very close to the Start of this race so some runners addressed their opinions on this as well.

The start of the course was really scenic as you run down Hollywood Blvd and see the Walk of Fame, Mann's Chinese Theatre, The Hard Rock Cafe and El Capitan Theater. Even though I am a local I still got excited to see these places. I didn't know that Shrek had a star on the Walk of Fame! 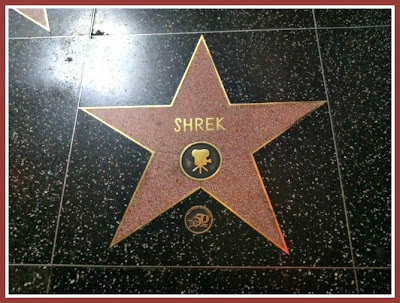 While I was out on the course, there was plenty of water and cups. There was lots of support out on the course including public safety and volunteers. I cannot speak for anyone who finished before or after I did but I am glad that I had a decent experience and hopefully the race director takes the issues that the other runners had seriously and will continue to make the necessary improvements.

The course was very hilly and NOT "mostly flat" as stated on the event website! I have to disagree with that! I was not expecting so many hills so it was not an easy half marathon for me. My Garmin picked up the course at 13.25 miles so I was about .75 miles short and I thought about that for most of the day.

Miles 4.25-6.25 were the hardest for me. These miles were completely uphill and I was so glad when I finally reached the top. I actually stopped and walked through the water stop because the hills worked me out. I just kept reminding myself that I was treating this as a training run so if I didn't need to kill myself! 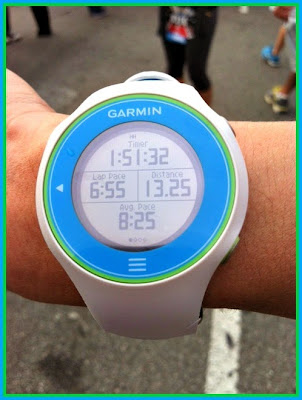 There were not a lot of goodies at the end of the race. They provided bottles of water, bananas and bagels. They did have Naked Juice and Odwalla there giving out small glasses of juice and bars. They were also giving out Coconut water but when I finished it was all gone. The 5K and 10K participants drank it all :(

My other half ran his first 5K which started at the same time as the half marathon and the 10K. He ran the 5K with his nephew and set a goal for himself to run at a 10:00 pace. He exceed his goal and finished in 29:33 (9:22 pace) and placed 4th in his age group. I know he liked it even though he always tells me how crazy I am to run like I do. He is already talking about another race. I think he might go for a 10K next. 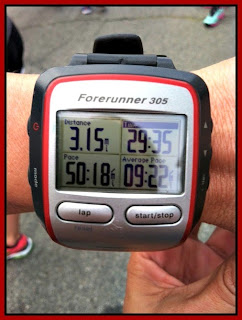 I really like the race bling! The half marathon medal is bigger than the 5k/10K medal but the design is pretty nice. The race bibs had the timing chip on the back of the bib so there was no need to wear anything on your shoe. I know that last year you had to attach a timing chip to your shoe. 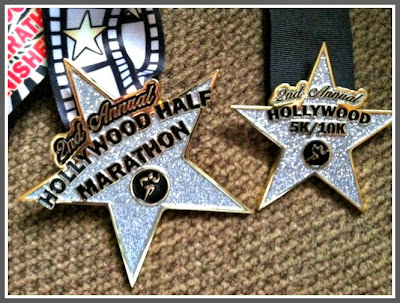 Anyone else run Hollywood this year? What are your thoughts on the race this year?
Posted by Boston Bound Brunette at Monday, April 08, 2013

Email ThisBlogThis!Share to TwitterShare to FacebookShare to Pinterest
Labels: 13in2013, Half Marathons, Hollywood Half Marathon, Race Reports