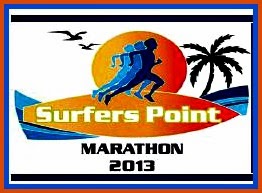 I think one of the most exciting things about being a runner is inspiring others to get into running and helping them reach their goals. Not only has my other half started running but my older sister, well she is only 11 months and 3 weeks older than me, has started running too. I think is great and I am so proud of them for giving it a try even if they do not end up loving it as much as I do! 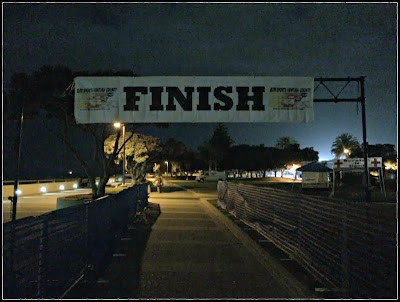 Now about this "couples race." Days before the race he kept telling me that he was ready. I think he just wanted to get it over with. The night before the race he was telling me that he wanted to run the race that evening since he was getting anxious! We took a quick walk over to Starbucks and then Finish line which was really close to our hotel room and he said he was ready but was still not ready to commit to a time. I agreed and we went back to the hotel and went to sleep. 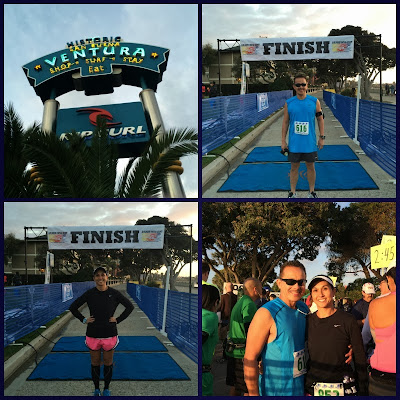 The half marathon did not start until 7:15 a.m. so we set the alarm for 5:30am and we took our time getting ready and eating our breakfast. We left the room about 6:30am and walked over to the Start. He mentioned that his back was hurting so I asked him if he was okay to run the race. He thinks that he may have slept wrong but the pain is still there. Not really sure what that is all about since is the first time it occurred. This was the view when we first got to the Start. It was about 54 degrees and it felt perfect. 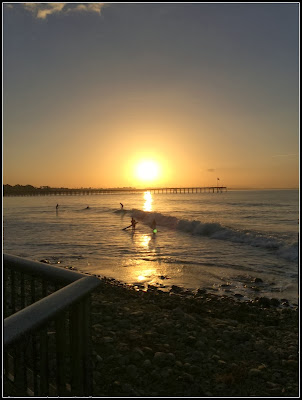 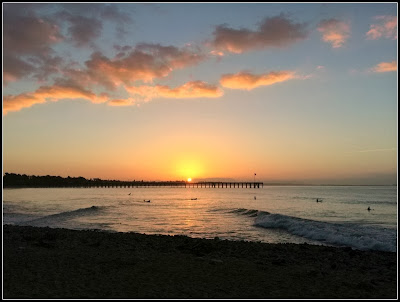 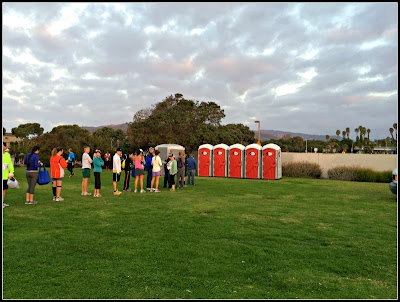 Water on the course was great and at every mile and a half. We carried our own water just in case they ran out of water. I did not want his first experience to end on a course that ran out of water. The only complaint that I have is the lack of photographers on the course. We only saw one and I think he was a one man shop. 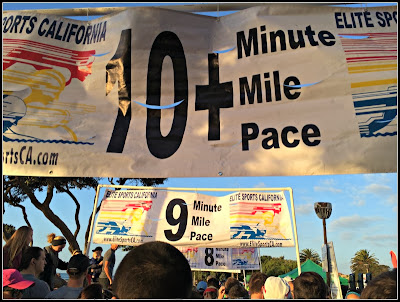 The marathoners started at 7:00 a.m. and then the half marathoners started lining up. He wanted to line up with the 10 minute + mile group so we did. There were pacers for both the half and the full but we did not want to run with a pacer.  The half marathon started right on time and we were off and running. I stayed next to him or closely behind him so that I did not make him nervous. His initial pace was around 9:25 so I reminded him not to take off too quickly. He also wore his Garmin to monitor his pace but I reminded him anyway since I know how that race day adrenaline can make you do silly things at the beginning of a race! 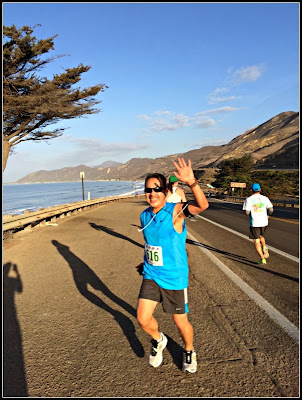 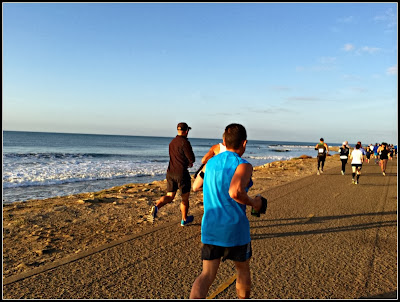 The course started out right at the beach and stayed by the water for the most part. The view was amazing! I kept telling him to focus on the view if he started to feel tired. 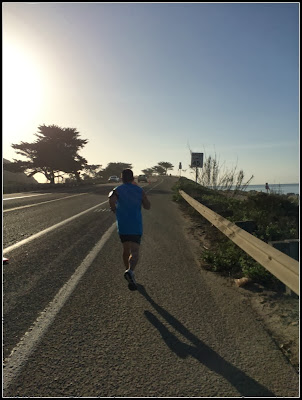 The course was supposed to be pretty flat but there were some areas that had some steep uphill climbs. 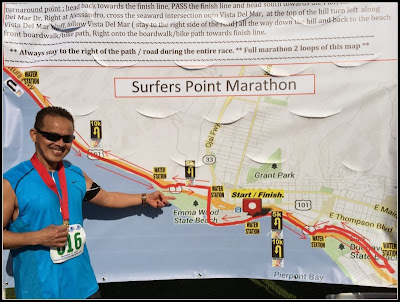 Luckily they did not last long since I could see the look of panic on his face whenever we would see one of them coming. 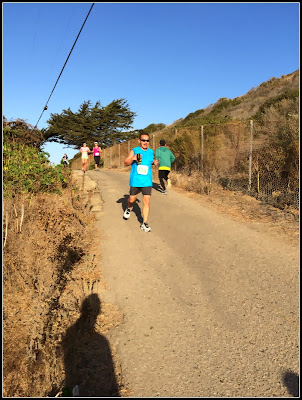 He was still feeling strong at the half way point and I kept asking him how he was doing. At this point I was running a little in front of him so I could take pictures of him and keep him going. I also took care of refilling our water bottles when needed and I also opened his GU for him and kept track of when it was time to fuel up. 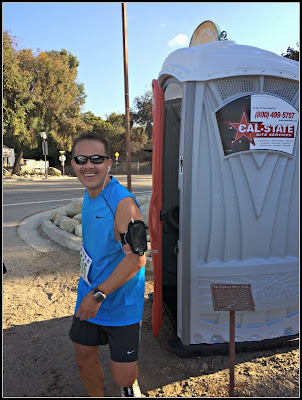 During out training runs, he would always stop to use the bathroom. I could tell that he was trying not to but right before Mile 8, he started looking for the porta-potty. 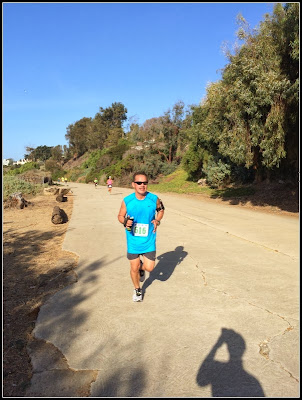 The course loops back to the finish right around Mile 9 and the it goes out two miles and then back to the finish. There was a decent climb at Mile 11 and at this point he told me that he was starting to feel a little tired. He never stopped except at the one bathroom break but I could see his pace starting to drop and I encouraged him to stay strong since we were almost finished. His back was really starting to hurt but he toughed it out and I was pretty proud of him since I probably would have quit or taken a walking break. 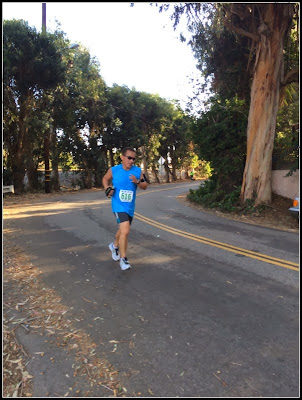 He told me that he wanted to give it everything he had to the Finish and at Mile 12.5 he was going to kick it into gear and go for it. And he did. We sprinted to the Finish Line at a 7:51 pace and crossed the Finish Line with our hands held and raised in the air. Unfortunately there was no photographers there to take our finish line photo but we did get this amazing picture right before Mile 9 that we absolutely love! It was the best $7.99 that I ever spent! I have posted this picture all over social media so please excuse me for being so obsessive about it but I can't help it. 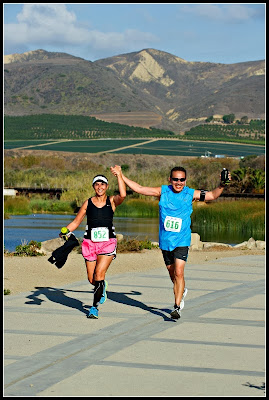 He told me that he enjoyed the race and he really enjoyed it because he loves running with me. I am now trying to convince him that if he can run a half marathon, he can run a full marathon. He just looks at me and laughs whenever I talk about it. I guess that is better than a "NO." I will give him some time before I start bugging him again. 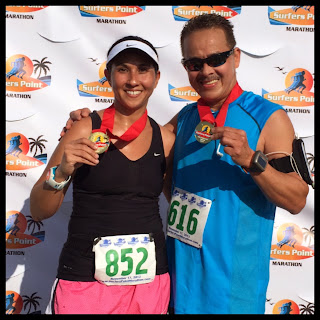 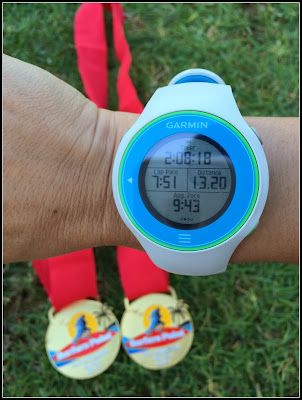 Have you ever ran a race with your spouse/significant other?
Posted by Boston Bound Brunette at Wednesday, November 20, 2013

Email ThisBlogThis!Share to TwitterShare to FacebookShare to Pinterest
Labels: 13in2013, Half Marathon, Race Reports, Surfers Point Half Marathon