I chose the Las Vegas Rock and Roll Marathon as my very first marathon because my family loves Las Vegas and so do I.  I thought it would be fun to run on the strip without it being full of traffic, well it still had human traffic, and enjoy the scenery!  So I decided to make it a vacation that included a Marathon! How crazy is that??

THE HEALTH AND FITNESS EXPO:
I arrived at the Expo at the Sands Convention Center and picked up my race bib and goodie bag. It was super crowded and people were just everywhere. We shopped around for a little bit and had a little bit of fun as you can see by the picture below. I have to say that we walked around the Expo for way too long and I was really tired by the time we finally got out of there!!

﻿﻿﻿I went to the table for Corral Changes and changed from Corral 22 to Corral 8.  There were 32 corrals in all which are released every two minutes.  I didn’t want to start after 8am and risk getting stuck in the possible chance of rain in the forecast, so I lied!  They gave me a little green dot to place on my bib with the number “8”. I was really tired by the time we finally got out of there because we walked a lot!

By dinnertime I was so nervous that I didn’t really feel like eating but I knew that I had to or else I wasn’t going to have any energy for the next day.  I ate as much as I could and left it at that. We went to Olive Garden and I had linguine with marinara sauce. By the time we left the restaurant, it was packed with runners! Good thing we got there early!
﻿﻿
﻿﻿﻿﻿I laid out all of my race gear the night before: Running Clothes, Garmin, Socks, Shoes, Bib, Race Belt, Jacket, Water, Chap Stick, Water Bottles, I-pod, and Vaseline for my feet to avoid blisters! I kept a big bottle of water by my bed and drank and drank! I planned to go to bed at 9:00pm and it was 10:00pm the last time that I looked at the clock.

I WAS SO NERVOUS!! The race started at 7:00am, so I ate my banana and half of a bagel and headed downstairs around 6:15am to see if any of the runners were down there yet. Lots of runners were hanging out at Starbucks getting breakfast and coffee. So many people were dressed in cute costumes and I was wondering how in the world they could run a marathon in a costume!


The Start Line was located right near the Mandalay Bay Hotel so we stayed at the Luxor, which was pretty darn close. It was 44 degrees outside and I was freezing!!  I wore shorts because I knew that there was no way I would survive in pants and I am usually warmed up by the first mile anyway. I found my corral, which happened to be with the 4:00 Pace Group, and just followed it closer and closer to the Start Line. It was really noisy out there but I heard the starting gun go off!
﻿﻿﻿﻿﻿﻿I decided to take a last minute potty stop before my coral was released and when I got out of the porta potty they were gone! I just blended in and off I went! I spotted by husband and my son once I crossed the starting line and I waived at them and hoped for the best!

I felt pretty good for the first six miles.  I spent most of my time weaving in and out of the crowds and looking for open space to run through. There were tons of fans along the strip and the bands were doing their thing.  The crowds gave me lots of motivation and I was feeling pretty good! I felt like I could have gone way faster but I knew that pacing myself was important so I kept it slow and easy. I was a little amazed at how the men around me were just openly farting and acting like nothing was happening!

Around Mile 6, I decided that it was GU time and I continued to GU every six miles of the race.  I attempted to GU and run at the same time so that I could maintain my pace. It was a little difficult but I did my best. I always carry my own water since I have this fear of passing out and not having any water to save myself from doing it.  The GU seemed to give me a boost and I kept on going.  By Mile 7 the crowds had dissipated and I was able to run freely without weaving. I started to hit a mini wall at Miles 10 and 11 because I was getting too focused on time and whether or not I could even finish the race!  I was also texting updates to all of my friends and family so I was a little overwhelmed in general!  The race offered runner updates via text message but it malfunctioned and they ended up having to refund the money to everyone who subscribed to it.


I noticed that the 4:00 Pace Group was still in front of me by a very short distance so I felt like I was on track to a decent finish time.  I knew it wasn't going to be 4:00 but at this point I was just praying that I could finish!  My husband and my son were waiting for me right around Mile 12, so I was keeping my eye out for them.  I also wanted to get rid of my jacket that I had tied around my waist since Mile 2!
I crossed the split point where the half marathon ended and the rest of the brave souls keep going to run the full marathon.  I turned the corner and what did I see?  A freeway overpass that resembled a good sized hill.  This is where I ran into some trouble and never really recovered.  I watched the 4:00 Pace Group tackle the overpass and I think I never saw them again!  Miles 13 to 17 were a little challenging but I knew that if we went up hill we had to go downhill at some point.

I had mixed emotions from Miles 18 to 24.  Up until this point in the race, I had not stopped running or taken any breaks.  I could feel myself slowing down at times but I didn't want to stop unless I really needed to.  I finally hit "THE WALL" at Mile 23 and ended up walking through the water station.  I filled up my water bottles, poured water over my head, and told myself that I needed to pick up the pace and finish the race. I only had a few miles to go and it would be over.

I gave it my all the last 2.20 miles but I was feeling it at this point and pushed with everything I had to get to the Finish Line. My husband told me to look for him at the Finish but I was so far gone at that point that I forgot to look for him.  He did see me though and took some great pictures!

Mile 25: 9:07
Mile 26: 9:30
I saw the finish line and had never been happier in my life!  I had completed my first marathon and swore that I would never do this to myself again!  As soon as the pain from the first marathon was gone (a week later)..I was already thinking about running another one.  I guess that is the way it goes in a runner's world.
My official time was 4:05:16 (9:22 Pace).  Not too bad for my first marathon! 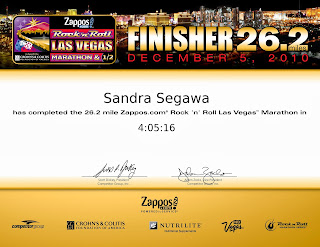