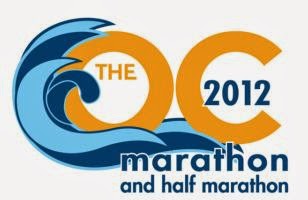 This is first race back since my hamstring injury and it felt pretty good to be out there running like I did in the"old days!" My last half marathon was on January 29, 2012 and I have missed running so much. I have sat out four races this year because of my injury and I want to put those depressing days behind me. This race was really different from the others because it was not a race that I planned to PR at nor did I have any goals for this race with the exception of finishing and getting that first medal towards the Beach Cities Challenge.  This mind set was a little different for me this time around but I think the time off from running has given me a new perspective about running and the patience that I needed to execute a safe and smart race. 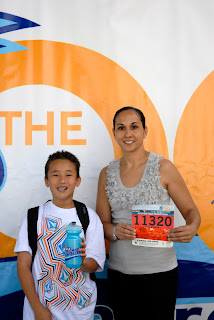 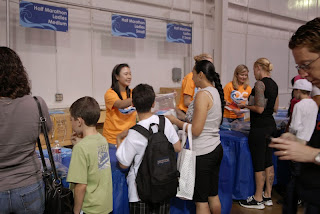 I was undecided as to whether or not I was going to run this race.  I wanted to be able to run 10 Miles without any pain and I was able to do that on the treadmill the Thursday before the race. I waited a couple of days to see if I developed any pain, discomfort or anything out of the norm.  I felt great but mentally I was still struggling with the idea. I prepared all of my gear for the race anyway and just waited it out. 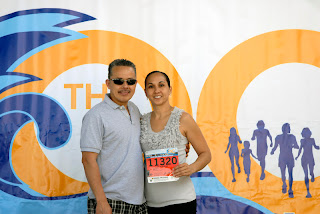 The Expo was at the OC Fair and Event Center, which also happens to be where the race ends. There was lots of parking but you had to pay parking for both the day of the Expo and race day. In spite of being undecided about running the race I went to the Expo since I needed the bib to run the race plus I decided that I would pick up my goodie bag since I paid for the race anyway. The Expo was a pretty decent size and was pretty crowded.  The Bib and Shirt pick up area was organized and moved fairly quickly which is a good thing.  We did a quick walk through the Expo and got suckered to buy a few things. My son loves going to the Expos because he loves to try all of the samples and spin all of the wheels in hopes of winning something. 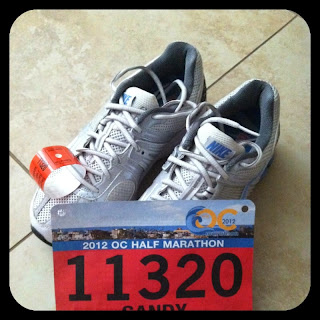 I had actually signed up for the full marathon a while back knowing that I wanted to pursue the Beach Cities Challenge but after my injury I had to downgrade to the half marathon with hopes of being able to complete half of what I had planned on. It was a heart breaking decision but a very smart one. The decision to run the race was made when this happened on Sunday morning at 4:00am.... 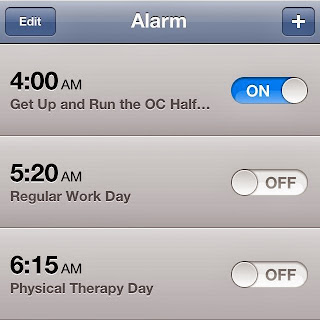 The OC Half Marathon was my first point to point race and the whole bus shuttle scenario was kind of stressful to me.  The race started at 6:15am and I was not on a bus heading to the start at 6:15am! I waited 45 minutes to get on a bus so I think it is best to have someone drop you off at the start to avoid having to be shuttled or be there an hour before your scheduled shuttle time. You live and learn, right? 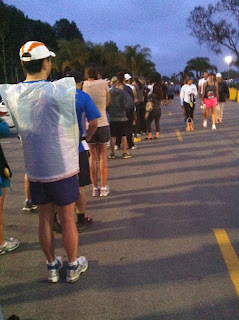 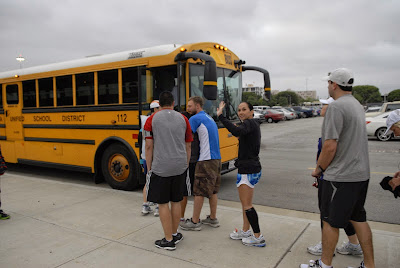 My bus arrived at the start around 6:35am and was one of the last buses to arrive. The start was about a three minute walk from the bus drop off location. I made a final stop at the porta potty and then lined up at the start and was off within a couple of minutes. I spent the first mile weaving in and out of traffic trying to find an open spot to settle into but that didn't really happen.
Mile 1: 9:09 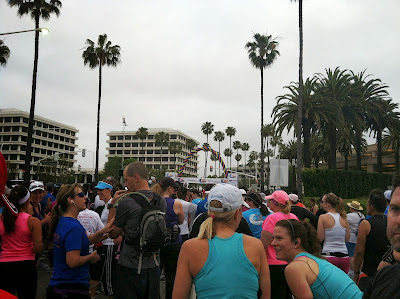 I was well behaved and took some breaks, walked when I thought I needed to and based my race on how my body felt and not my pace. All of my training for this half was done on the treadmill so this was my first time stepping off the of mill.  It was a tough run and the treadmill training did me no justice because I have been running on the mill with minimal elevation.

The course was not a difficult one but it did have a few hilly moments that were a little risky for me at this point. The course starts on a slight climb for the first mile, downhill on Miles 2 and 3 and then it's kind of up and down for the remainder of the course.  I had to slow myself down after the downhill miles.
Mile 2:8:19
Mile 3: 8:24
Right before Mile 3 the course takes you by the water and it is pretty scenic and the breeze is refreshing. The weather was great as well.  It was 59 degrees at the start and about 63 degrees at the finish with overcast skies and no sun. 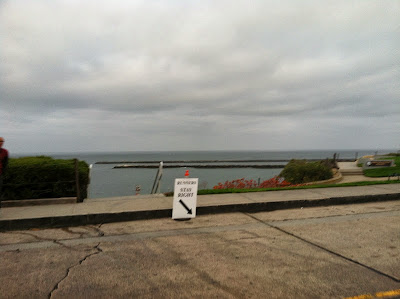 There were also a couple of times around Miles 6-8 where the course got really narrow and took the runners on a bike trail. This gets ugly when you have a bunch of people walking and you cannot get through or let alone move.  I don't have a problem with people walking but I guess it was just bad timing with the course becoming so narrow.
Mile 6: 9:08
Mile 7: 8:53
Mile 8: 9:14 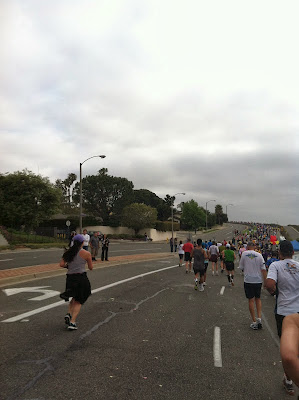 I didn't look at my Garmin much at all which is pretty much unheard of me for me!  The only time I looked is when it beeped to tell me that I had completed another mile.  Based on what I saw, I adjusted my pace to keep myself from going too fast. For the most part, my miles were pretty close to 9:00 and that was comfortable so I tried to maintain that pace. Miles 12-13 were tough and I was getting tired.

Mile 12:8:56
Mile 13: 8:42
I did give myself a slight push the last quarter mile because I wanted to be done!  I was getting tired and I knew that the slower I ran the longer I was going to be out there. 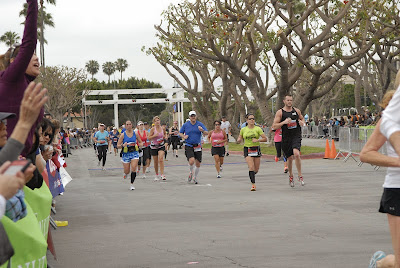 My official time was 1:57:57.  Nothing impressive for all of you speed demons out there but crossing that finish line was an incredible feeling for me! It was a feeling that I have never felt before! I am so thankful to be running again and even more grateful that I finished the race! 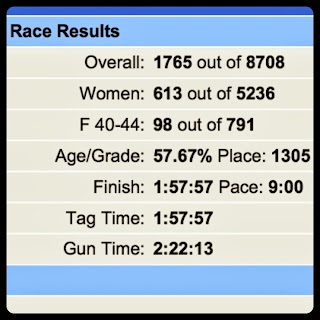 Can you tell that I was pretty tired?  I haven't seen 13.1 miles in a few months so I guess it shows! I wasn't in any pain at all during or after the race but my PT tells me to ice after a run so I was just being a good patient. 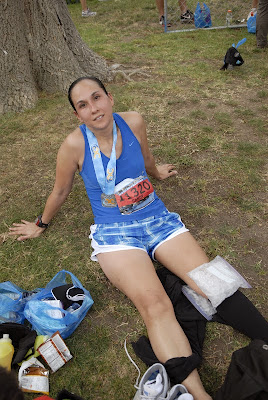 I know that I have lots of work to do! My next race, The Disneyland Half Marathon, isn't until September so I have plenty of time to train properly and get myself back into shape. I am also entertaining the idea of running the Long Beach Marathon at the end of this year.  If I am able, I will be running in honor of my Dad who is battling cancer. 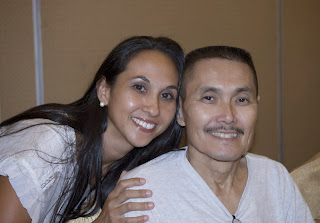 I think it might be a little too soon to officially say that "I AM BACK" but things seem to be moving in the right direction!
Posted by Boston Bound Brunette at Monday, May 07, 2012