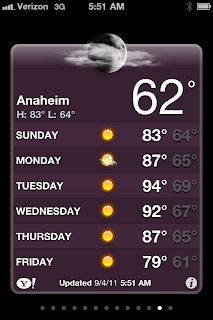 This is going to be a long one with lots of pictures and you will soon found out why. If you just want the details, scroll to the bottom of the page!

THE EXPO:
I was so excited when I picked up my race bib because they placed me in Corral A!  Corral placement is based on your official time in another timed event so I used last year's time from the Disneyland Half Marathon and this is where it got it me! 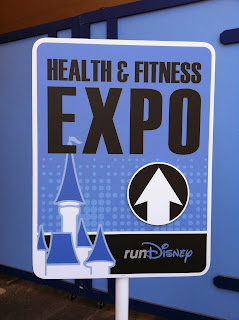 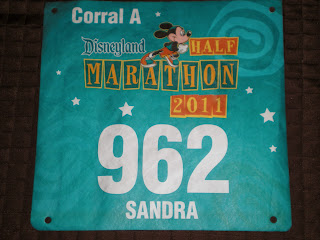 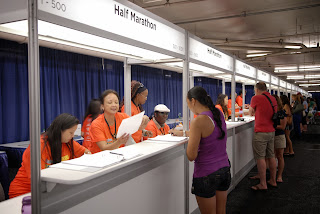 After the Expo, we walked around Disneyland for a little while since we are annual pass holders. My son loves the monorail so we rode it into the park and we even got to sit in the very front! After leaving Disneyland, we headed over to Red Robin to have lunch.  My lunch was probably not a very appropriate one but I love the protein burger at Red Robin and I skipped the fries for broccoli. I even ate a couple of onion rings.  They are the absolute best I have ever had! Oh, and I also had a freckled lemonade too.  Gotta have my drink...it's non-alcoholic don't worry! 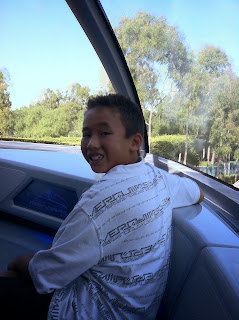 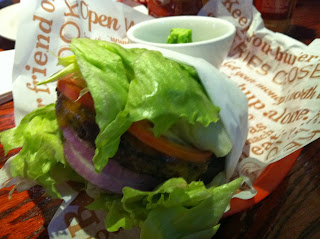 Course Map: The course is pretty flat for the most part and has lots of entertainment for runners to enjoy. I am too focused on time and never seem to enjoy what this race has to offer.  There are characters throughout the first 4 miles of the course within the theme parks but just a handful of people stop to take pictures. I really want to run this race for fun in the future so I can take full advantage of it! 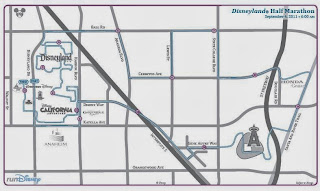 I was really worried about the weather and had been monitoring it for the last week or so.  I hate the heat and never train in it for any reason so I will never be prepared for it.  The hotel we stayed in was about .65 miles from the start so we decided that we would leave the car at the hotel and make life easy on ourselves.  Last year we stayed at a local hotel that was about 1.5 miles away and then drove to the race in the morning and boy was that a mistake.  This year it worked out much better.  We took a walk to the Start the night before to see how long it would take us and how long of a walk it was.  We ended up walking and grabbing a sandwich from Subway for dinner while we were out since the hotel parking lot was completely full!  If we would have driven I not sure that we would have had a place to park because everyone seemed to be walking instead of driving. I did more walking than I wanted to and started to wonder if it was going to work against me on race day...

RACE DAY:
I woke up at 4:00am and got dressed.  I am pretty anal about laying out all of my stuff the night before because I would kill myself if I happened to forget something important. I could hear all of the other runners leaving their hotel rooms and heading down to breakfast.  We left the room at 4:30am and headed over to Disneyland. It was still dark and there were runners on every corner of the intersection.  I wasn't nearly as nervous as I was last year when I ran this same race. I was pretty nervous last year because it was the first race I had ever entered a race and I had no idea what to expect. I made a quick stop to the port a potty and then headed to the corrals.  Corral A does have it perks and I was loving it!  You can see Mickey and Minnie, the officials only let those whose bib identifies them as belonging in Corral A through, you get to take off first and avoid weaving around those who are slower than you, all of the special guests and famous people who are running the race are placed in Corral A and you just feel important being there. I am not used to this like many of you speed demons might be so I was pretty excited!! 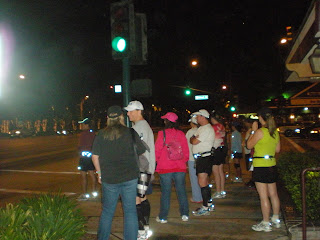 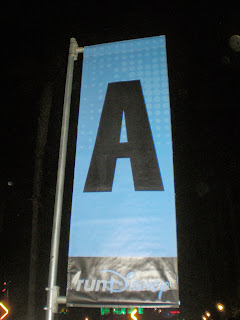 My goal pace was 8:18 in hopes of finishing in 1:49.  Last year I completed this same race in 1:50:58 and one of my Running Goals is to complete a half marathon in under 1:50.  I was able to make it way to front of my corral and started within 5 seconds of the official start.  I took off faster than I wanted to because all of the fast people are in Corral A and you have no choice but to move it or possibly get trampled!  I was laughing to myself because I was now the runner that everyone was passing!  I think I was the slowest runner in Corral A! I still loved being in Corral A because everyone was so spread out and there was lots of space around me.  I ran a 7:58 for Mile 2 and I usually kill myself to pull off a lap like this in the very end of my training runs.  My husband and my son were waiting for me right around Mile 4 which is where you actually exit the theme park and hit the streets of Anaheim.  They made me a great sign this year so that I couldn't miss them. Please notice that my son also has on his "Run Mommy Run" t-shirt.
Mile 4 was exciting because I saw my two biggest fans.  They were able to take some great pictures because not a lot of fans were waiting at at this location. They actually had to sneak into this area because once the race started they closed this area and this is where I was looking forward to seeing them. 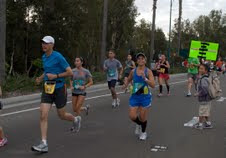 Immediately after I seeing my husband and son, came the overpass on Ball Road which is probably the worst part of the whole course.  It's really not that bad and I was definitely distracted by the beautiful sunrise. I actually stopped to take a picture of the sunrise and I didn't want to stop unless I really needed to, but I couldn't pass this one up. Mile 5 was my only lap that was under 8:18. It was actually 8:23 due to the Kodak moment. 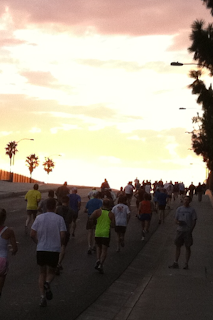 ﻿Another exciting part of my run was around Mile 5.5 when I noticed that the man in the yellow shirt that had been beside me for quite some time was Drew Carey.  He was very friendly and has actually lost 80 pounds since he started running. I really wanted to take a picture of him but didn't want to piss him off so I decided to secretly take a picture of him and hope he didn't notice and go off on me. By the way, I am faster than Drew Carey! I also GU'd at Mile 5.5 because I needed it!
I knew that I was ahead of schedule around the halfway point and I was very tempted to stop and take a break but I wanted this one so I pushed myself to keep going. By Mile 7, the sun had made it's way out but the temperature was still pretty cool.  The part of the course that all of the runners really look forward to, running through Angel's Stadium, was really close and I needed that boost of excitement to keep me going.  The volunteers handed out GU right around Mile 9 and I was Gu'ing through Angel's Stadium for some odd reason?? No, I am not a big Angel's fan and I hope I wasn't on the jumbo tron Gu'ing! I didn't even want to look.

I was getting tired by Mile 10 and my legs were feeling it but I was determined to get my PR so I pushed hard.  I also noticed that my Garmin and the Mile Markers were off by about .12-.16 miles so I knew that I had to pick up the pace a bit to make up for the "added mileage."

By Mile 11, I was pretty beat!  I could feel my pace slowing down but I fought it and pushed hard!  I was so happy to see Mile 12 and I gave it all that I had left, which wasn't much.  I could feel the burn in the legs and I knew I was going to be sore the next day...and I am! I took one last look at my Garmin and I knew that I was going to come in around 1:48 and I was elated! Official Time 1:47:43! This was much more than I had hoped for!  Moments like this really make you feel good about all of the hours of training that you have put in and all of the sacrifices that you have made to stick to your training plan.
Disneyland was definitely the "Happiest Place on Earth" on this particular day.  So how did I celebrate?  I had a good breakfast which included pancakes.... 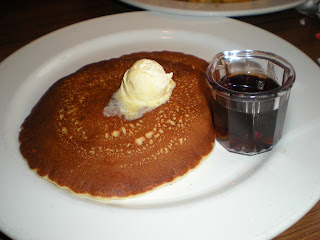 and then I went to Disneyland and had a double scoop of ice cream in a waffle cup! My birthday is right around the corner and my new PR was the perfect birthday present! 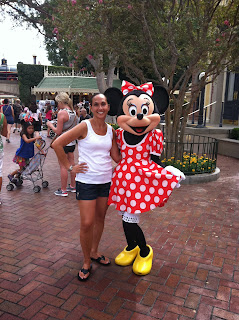 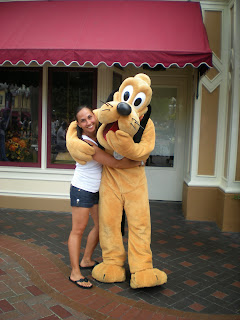 Here are my splits and my official results if you care to take a look. According to Run Less Run Faster, a BQ of 3:45 is realistic if you can run a half-marathon in 1:47:25. Kind of makes me wonder if I hadn't stopped to take the pictures of the sunrise and Drew Carey, then maybe I  could have finished 18 seconds faster!  I guess it's time to step it up and keep pushing for Boston just a little bit harder! I have the Long Beach Marathon coming up in about a month and this Sunday I will attempt a 20 Miler!! That's going to be a tough one!! I was looking forward to tackling 20 miles with Shawna, my running buddy, but she is officially out of the race due to an injury!  Bummer!! 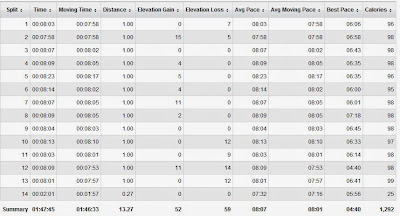 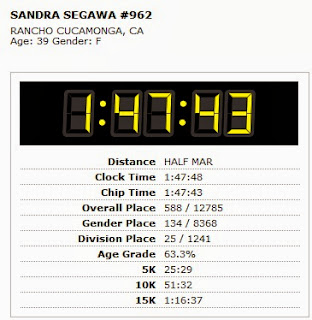